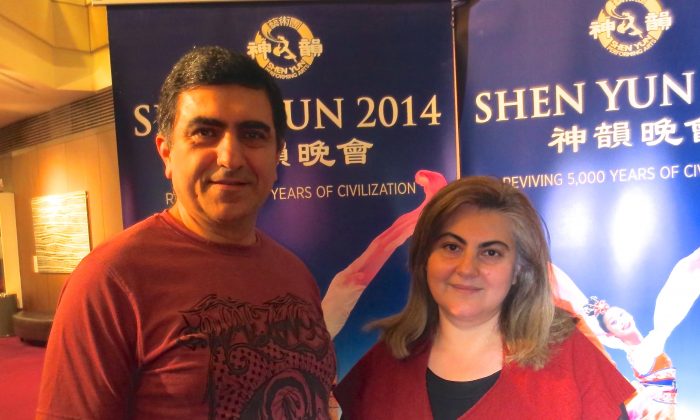 “I thought it was wonderful, beautiful, mesmerising, everything just great,” she said.

Shen Yun is based in up-state New York and has classical Chinese dance at its heart.

According to their website “China was once known as Shen Zhou—The Divine Land. This profound name describes a land where deities and mortals coexisted, and a belief that the divine transmitted a rich culture to the people of the earth.”

Dr. Melkoumian felt she could see the divine on stage. “The gentleness, gentleness of Chinese souls. I could see in the dance, and in the choreography and the songs and in the words.” She said.

“I mean the wisdom, being larger than life, being connected to more eternal values, thinking on a larger scale like on a mankind scale. And being always above the situations, being always connected to what is eternal.”

She continued, “I was always eager to be closer to the Chinese culture and today was that opportunity and I just enjoyed it immensely.”

She was moved by some of the lessons and quotations and said she would use them with her students. “I find it a great advantage that this kind of ancient wisdom that is from China is coming out,” she said.

‘The Chinese spirit will never die’

Dr. Melkoumian saw Shen Yun with Levon Gabrielian, a medical doctor who is currently teaching and is also heavily involved in research and has multiple research publications.

Dr. Gabrielian could see a conflict between good and evil on stage and felt Shen Yun offered inspiration to the Chinese people and hope for the world.

“There is always a fight between good and evil … it’s like each time the people get stronger … it doesn’t matter what comes, it will go, and the people will prevail,” he said.

“For thousands of years Chinese people have lived there, governments have come and gone, but the Chinese spirit will never die, it cannot be taken away or destroyed. The truth is always the way and the spirituality of this country will hopefully liberate the materialist mentality in the world.”

Dr. Gabrielian said that governments come and go “but the beauty of culture always stays. … I always believe that the people, the spiritual level of the culture of that nation or the history is always going to prevail and dominate It always comes out as the winner.”

Shen Yun has soloists singing in the bel canto style, Dr. Gabrielian felt there was a divine message in the words.

“Definitely! When they sung these songs, the music and the words are in are absolutely in a perfect poetic harmony and it was a divine message. I loved it a lot,” he said.

There were so many aspects to the Shen Yun performance and shared further on what he saw.

“It was fantastic, beautiful, smart, exciting, kind, caring, everything,” he said.

Throughout the performance he noted, “The kindness and spirit in Chinese, that was again a great pleasure to experience. It’s that poetic beauty of Chinese philosophy, Chinese music.”