Do You Know the Signs of Vitamin D Deficiency?

A lack of the sunshine vitamin is linked to fatigue, aching muscles, and a dozen other symptoms
By Joseph Mercola 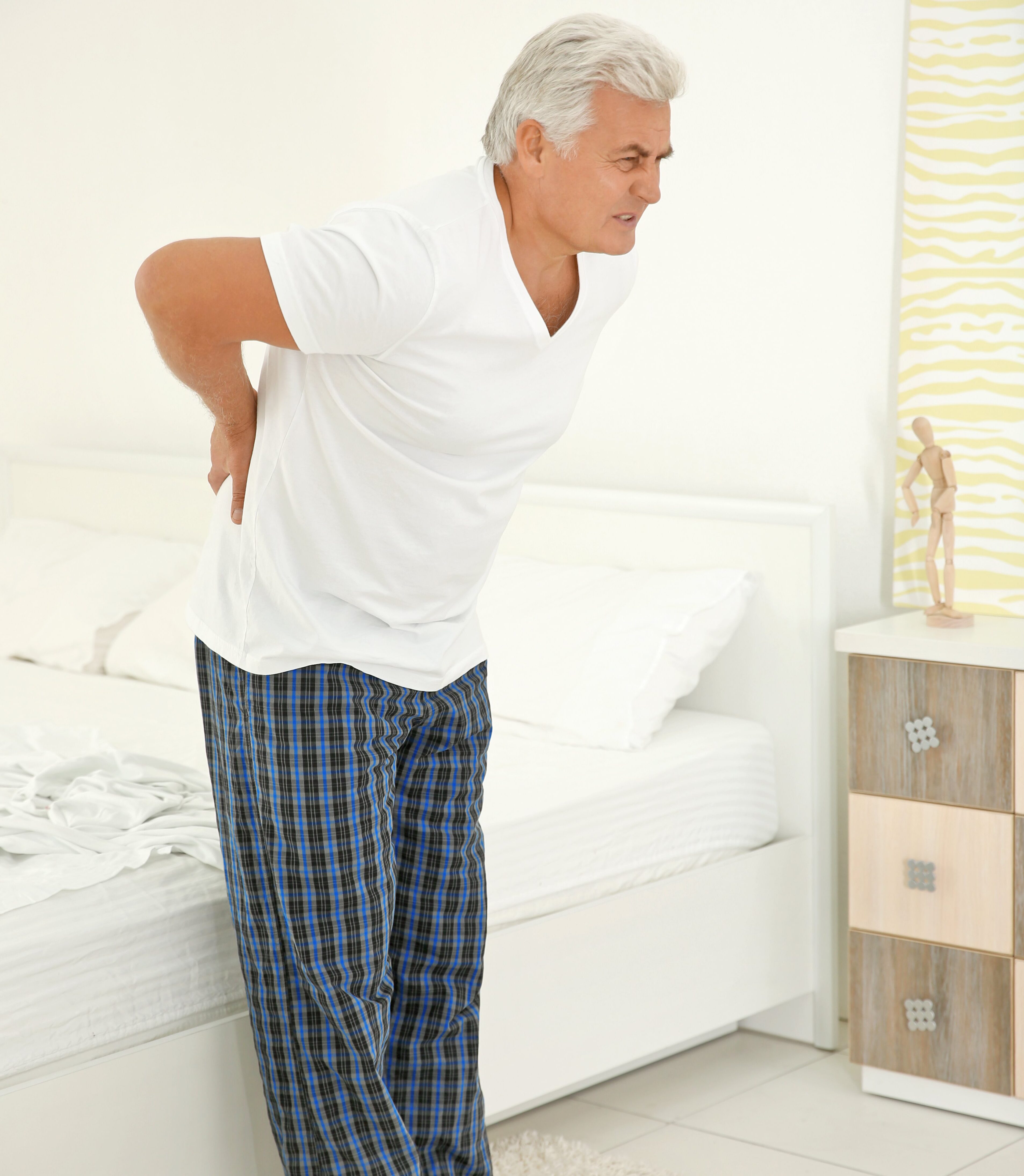 Vitamin D receptors in our nerves can a ect our perception of pain. (Africa Studio/Shutterstock)
Tell
Facebook
Tweet
Email

It’s also called the sunshine vitamin since your skin makes vitamin D when exposed to ultraviolet light from the sun.[1] Vitamin D performs many functions within the body, including maintaining adequate levels of calcium and phosphate, essential for normal bone mineralization.[2]

The main indicator of your vitamin D level is 25-hydroxyvitamin D (25OHD). Data collected from the National Health and Nutrition Examination Survey in 2005-2006 showed a deficiency prevalence of 41.6 percent in the U.S. population.[3] However, as I discuss later in this article, as many as 80 percent of people may be deficient in vitamin D.

However, GrassrootsHealth Nutrient Research Institute recommends vitamin D serum concentration levels from 40 ng/mL to 60 ng/mL or 100 nmol/L to 150 nmol/L.[4] At this level, the number of people who are likely deficient in vitamin D would be significantly higher.

During cold and flu season, and the COVID-19 pandemic, it is essential to maintain healthy levels of vitamin D to help reduce your risk of viral and bacterial illness.[5,6] A blood test is the best way to determine your vitamin D levels, but here are some symptoms that may indicate your levels are low.

Nearly half of all adults are affected by muscle pain.[7] Researchers believe most of those adults are deficient in vitamin D. Some studies have suggested that nerves have vitamin D receptors that affect the perception of pain. In one animal model, research demonstrated a vitamin D-deficient diet can induce deep muscle hypersensitivity that wasn’t connected to low levels of calcium.[8]

Vitamin D regulates the level of calcium in your body necessary to protect bone health.[9] Vitamin D deficiency can cause your bones to soften a condition called osteomalacia. This may be a precursor to osteoporosis.

This is a common symptom of a variety of different health conditions, including sleep deprivation. Researchers have found that supplementing vitamin D can improve the symptoms of fatigue suffered by cancer patients.[10]

In one study[11] using 174 adults with fatigue and stable medical conditions, the researchers found 77.2 percent were deficient in vitamin D. After normalizing their level, the fatigue symptoms improved significantly.

Vitamin D deficiency is as common in athletes as in non-athletes. Vitamin D is crucial for muscle development, strength, and performance. Older adults taking a vitamin D supplement have a reduced risk of falls and improved muscle performance.[12]

Correction through oral supplementation or sensible sun exposure may reduce symptoms of stress fractures, musculoskeletal pain, and frequent illness. Vitamin D also has a direct effect on muscle performance. In one paper from the Journal of the American Academy of Orthopaedic Surgeons, the author wrote:[13]

Vitamin D is also essential for your brain health. Symptoms of deficiency can include dementia caused by an increase of soluble and insoluble beta-amyloid, a factor in Alzheimer’s disease.[14] Research has also found an association with depression15] that may be linked to the function of vitamin D buffering higher levels of calcium in the brain.[16]

The mechanism linking vitamin D and poor sleep quality hasn’t been identified. But research has found people with low levels of vitamin D have poor quality sleep and a higher risk of sleep disorders.[20]

Excessive sweating, especially on your head, or a change in your pattern of sweating, can indicate a vitamin D deficiency.[21]

Vitamin D is crucial to the proliferation of keratinocytes and plays an important role in your hair cycle. The vitamin D receptor appears to play a role in the anagen phase of hair growth, leading researchers to conclude, “Treatments that upregulate the vitamin D receptor may be successful in treating hair disorders and are a potential area of further study,” they wrote in a study published in Dermatology Online Journal in 2010.[22]

9. Slow-Healing Wounds
Chronic wounds are a major public health challenge.[23] In the United States, 2 percent of the population is affected by chronic wounds and it is estimated to account for 5.5 percent of the cost of health care in the United Kingdom’s National Health Service (NHS). Vitamin D promotes wound healing and the creation of cathelicidin, a peptide that fights wound infections.[24]

Clinical studies have shown that vitamin D3 improves circulation and can help improve high blood pressure.[27] In one study,[28] researchers discovered that vitamin D3 also has a significant effect on the endothelial cells that line your cardiovascular system. They found that it helped balance concentrations of nitric oxide and peroxynitrite, which improved endothelial function.

How vitamin D affects obesity hasn’t been identified. However, data do show there is a high probability of deficiency in people who are obese.[29]

There have been multiple epidemiological studies that show vitamin D deficiency can increase the risk of infection and raise the severity, particularly in respiratory tract infections.[30] Multiple studies have demonstrated that vitamin D deficiency increases the potential risk for severe disease and mortality, especially in those who are critically ill.[31]

Around 80 percent of people with COVID-19 are deficient in vitamin D.

Since then, mounting evidence has revealed this is indeed the case as researchers have repeatedly found that higher levels of vitamin D reduce the rate of positive tests, hospitalizations, and mortality related to this infection.

One study,[34] released in late 2020, assessed the serum 25OHD levels of patients hospitalized with COVID-19 to evaluate the influence it might have on the severity of the disease. The researchers found 82.2 percent of those with COVID-19 were vitamin D deficient (levels lower than 20 ng/mL).

Interestingly, they also found those who were deficient had a greater prevalence of cardiovascular disease, high blood pressure, high iron levels, and longer hospital stays. A second study[35] found similar results for people who only tested positive for COVID-19.

It is worth noting, these patients were tested for the illness using the PCR test, which gives notoriously high false-positive results. They didn’t necessarily have symptoms of the illness.

Recently, data showed people who received supplemental vitamin D3 while hospitalized with COVID-19 had reduced admissions to the ICU by 82 percent and reduced mortality by 64 percent.[36]

Editor’s note: This preprint study has since been pulled due to “concerns about the description of the research in this paper,”[37] but an archived version is still available.

You can read more about the study, from information published before being pulled, at “Vitamin D Supplementation Reduces COVID-19 Deaths by 64%” on Mercola.com.

Before the paper was removed, this information triggered British MP David Davis to call for a reevaluation of the official recommendations for vitamin D. He tweeted, “The findings of this large and well-conducted study should result in this therapy being administered to every COVID patient in every hospital in the temperate latitudes.”[38]

He added that the demonstration of the “clear relationship between vitamin D and COVID mortality is causal,” and his government should raise the availability of free vitamin D supplements to vulnerable populations. Other experts also called for official vitamin D recommendations.[39]

It’s important to remember the data showing people who are deficient in vitamin D have a higher risk of severe disease has been available long before the COVID-19 pandemic. Yet, information that may suggest the other side of the same coin—namely supplementing with vitamin D—may have a positive effect on disease severity, can come under attack.

Vitamin K2 MK-7 and magnesium both play an important role in your overall health and in the bioavailability and application of vitamin D in your body. If you’re not using magnesium and vitamin K2, you could need nearly 2.5 times more vitamin D, which GrassrootsHealth discovered in its D*action project.[42]

More than 10,000 individuals provided information about supplement use and overall health status to GrassrootsHealth since they began conducting large-scale population-based nutrient research in 2007.[43]

That information has led to the recommendation that vitamin D blood levels between 40 ng/ml and 60 ng/ml (100 nmol/L to 150 nmol/L) are safe, effective, and lower overall disease incidence and health care costs. As reported by GrassrootsHealth from their data:[44]

Mind & Body
Loneliness Is Killing You (Yes, Even You!)