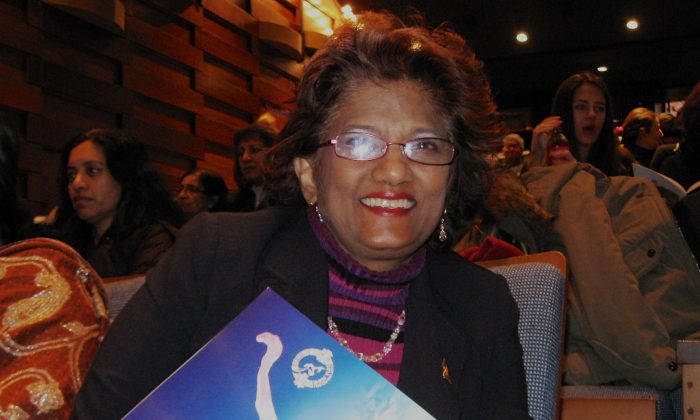 TORONTO—Dr. Tota-Maharaj has devoted her life to serving others. In addition to a distinguished career as a medical doctor, she has been actively involved in several women’s organizations, and continues to devote herself to public service.

Last year, she saw posters of Shen Yun Performing Arts, and decided she must come see it.

The renowned classical Chinese dance and music company is in town for the weekend, and Dr. Tota-Maharaj came to see it Friday night at the Sony Centre for the Performing Arts.

“The dancing is exquisite,” she said.

The vitality and grace of the dancers particularly struck her.

“Very light and beautiful,” she added.

One of the most comprehensive dance systems in the world, classical Chinese dance is a vast systematic dance form, encompassing 5,000 years of Chinese culture within its movements. The rigorous discipline involves strict training in physical expression and specific postures, as well as various aerial and tumbling techniques.

Dr. Tota-Maharaj was impressed by the manner in which this culture was preserved and manifested in Shen Yun’s performance.

She also noted the refinement and discipline of the dancers, which she described as a manifestation of the Chinese culture.

One notable aspect of the culture is its emphasis on cooperation and community. Dr. Tota-Maharaj noticed this in Shen Yun’s dancers.

Through its dances, Shen Yun takes the audience through a journey from China’s divinely inspired origins, passing along through myths and legends, celestial palaces, and imperial dynasties, as well as contemporary stories.

Dr.. Tota-Maharaj appreciated the stories behind the dances, reading the descriptions in the program book, and enjoying the performances.

She was struck by the beauty of the colourful costumes. “They look like dolls on stage,” she said of the dancers. “Beautifully dressed—very nice, very nice.”

Dr. Tota-Maharaj said she would be back next year, and encouraged her friends to see the performance.