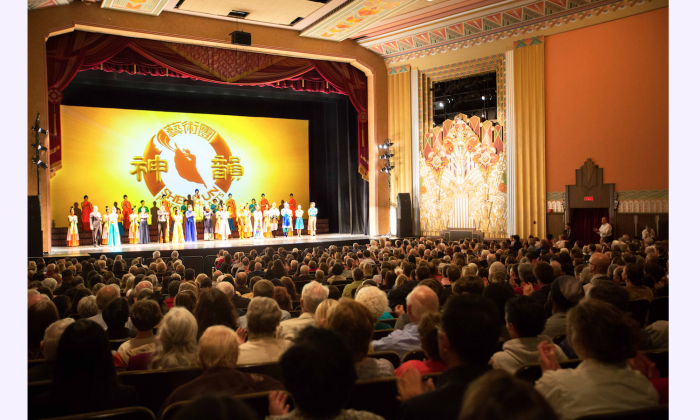 BURLINGTON, Vt.—Deb Shannon, originally from the melting pot of New York City, had been used to diversity. In Burlington, however, there is precious little chance to see a large display of the authentic culture of other countries. So she made a point to see Shen Yun Performing Arts’ revival of 5,000 years of traditional Chinese culture.

“You get one very tiny piece of so many different facets of an enormous country,” Ms. Shannon said. “I’m just curious, more curious than I was before.”

She was grateful the New York-based company’s tour included the Flynn Center for the Performing Arts this year, to see the many ethnicities that make up China dance across the stage. According to Shen Yun, there are over 50 ethnic minorities groups across China, and a number of these ethnic and folk dances are included in the program this year.

Ms. Shannon wondered at the Tibetan ethnic dance, with white long sleeves representing “khata” scarves used as gifts, and the Manchurian traditional dress in another dance. She wondered if more of us would be able to see things, if there was still the chance.

After all, these are facets of a culture on the brink of extinction.

In 1949, communism took power in China, and a large scale effort to uproot the traditional culture powered ahead. Through systemic campaigns like the Cultural Revolution, temples and arts and lives were destroyed, leaving little of 5,000 years of civilization to pass on.

In 2006, artists from around the world formed Shen Yun in New York to pick up the pieces, and present the authentic culture on the world’s stage, according to its mission statement.

Ms. Shannon, a personal coach, said this represents a culture of so many perspectives, as cultures are apt to do. It not only sparked her curiosity, but had her reflecting on identity.

“We have to be true to who we are and be present,” Ms. Shannon said.

How to Represent 5,000 Years in Two Hours

A Shen Yun performance is built on classical Chinese dance, a form thousands of years old. It is used to tell stories of heroes and villains, emperors and gods, magical monkeys and dragons of the sea.

Rose Ferguson, an educator, is a regular at the Flynn Center. She was astounded at the presentation, and said Shen Yun was a very, very popular performance.

“It was gorgeous. The talent of these young people, it opens the doors to us as far as the world of China is concerned,” Ms. Ferguson said. “With the colors and the talent that these individuals have, it’s electrifying.”

Kathy Montague, another educator, thought the performance was “spellbinding.”

She thought the rest of the audience must have felt the same. At the end of one of the pieces, the audience was completely silent. She thought they were stunned at the beauty of what looked like lit flowers. Then they burst into applause.

“Dance knows no bounds,” Ms. Montague said. She felt it was like a gift to have seen Shen Yun, and wished more could experience it, and that she could see it again. “That whole sense of being inspired to have this creative energy that just expresses itself, whether it be through dance, through music, through song, and to actually see it just explode onstage, it was just wonderful to see.”

The Millers saw Shen Yun’s single performance in Burlington, Vt., as well, and said they were left with a feeling of being uplifted. The culture was new, the dances and costumes diverse, and they felt they were seeing history and art from worlds away.

The couple, like many others who attended the performance, learned about Shen Yun last fall when the Shen Yun Symphony Orchestra played in Vermont for the first time. The Shen Yun company includes four touring groups of equal size. Every year the best of their orchestra members have a limited tour in North America, showcasing the ensemble’s unique blend of Western and Chinese instruments, performing original and classical music.

Mrs. Miller said she could listen to it throughout the house every day, so they had been eagerly awaiting Shen Yun’s performance.

It had Mr. Miller reflecting on the sense of freedom he enjoys, and how others who have had that right denied to them persevered in their beliefs. Mrs. Miller was touched by the performers who came together to create Shen Yun and embrace their heritage, and hoped this freedom was in China’s future.

There is a spirituality in Chinese culture different from her understanding of religion, she added. It is not formalized, like going to church ever week, but it is in “how you live your life.”

“How you interact with the world and nature. The spirituality is part of everything, and that is beautiful,” Mrs. Miller said.

What stood out the most to Kierney Gaboriault was how sincere the performance was, how authentic, she said. “It’s absolutely for real.”

So much so that it felt surreal, in another way, she continued. The amount of effort that went into such a vast performance astounded her. The artists loved what they were doing and expressed it, and she felt it. She felt their stories, the struggles of their characters, the struggle over the loss of culture in China, and now this revival.

Not all of us have that tremendous dedication, have that drive, Ms. Gaboriault said, which made Shen Yun’s work all the more fantastic. “And it’s important to all of us.”

She said they were creating “the opportunity to see something so beautiful that we don’t necessarily see here,” and expressing things that people don’t even know they don’t understand yet. But seeing the performance, and taking a step back, there was a spiritual realization of sorts, like something like “This is what I only hope to have one day,” she said.