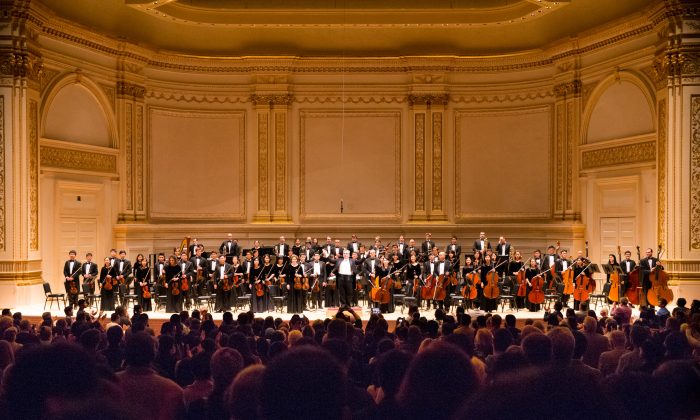 Discover a Different World Behind the Music

Shen Yun Symphony Orchestra is returning to Chicago on Oct. 18 for a 3:00 p.m. performance at the Chicago Symphony Center, one of 11 celebrated concert halls to present their 2015 autumn tour in North America.

Shen Yun Symphony Orchestra offers an infusion of East and West traditions with soulful original compositions that feature melodies played by ancient Chinese instruments, such as the erhu and pipa. The powerful backdrop for the melodies is a full Western symphony. In addition, bel canto solo vocalists sing original compositions in Chinese.

“I honestly believe that [the audience] will be surprised by the sound coming from the stage,” said Shen Yun Orchestra Conductor, Milen Nachev, in an interview posted on Shen Yun’s website.

“The sound will be extremely unique because of the combination of Western and Eastern instruments,” he said.

Shen Yun Symphony Orchestra Composer Gao Yuan, in a Q&A interview with Epoch Times, said, “This idea of using Western orchestral arrangement to present China’s 5,000 years of culture and music is new and hadn’t been done before. And we explore a range of China’s distinct dynasties and ethnic groups.”

The end result is a vivid cross-cultural experience, according to the website.

“We want to give the audience not only an emotional pleasure, but the experience of discovering a completely different world behind the music,” Mr. Nachev said.

By a different world behind the music, Mr. Nachev means: “It’s like a secret code inside the musical text that we bring out to the audience. It’s not necessary for them to understand the secret code, but the effect and the resonance is there.”

Audience reactions are reported to feel uplifted, tearful, and truly touched without being able to necessarily say why.

Conductors, composers, musicians, and audience members alike are praising the Symphony Orchestra for its unique and well blended sound.

After hearing the Symphony Orchestra in Carnegie Hall in New York City on Oct. 10, 2015, Grace Blank sent her friend a text stating: “It is so beautiful, I have been pushed to tears.”

“In a grander scale, this music really reaches, I think, all cultures. It’s a form of art [which] helps us unite and bring people together,” said Navy officer Nicholas Matos, who attended the Oct. 11 performance at the John F. Kennedy Center for the Performing Arts.

Elizabeth Raum, composer and award-winning symphony oboist, said after the first performance of the season, “It was quite spectacular, I must say, and I’m overwhelmed by the quality of the musicians—they are wonderful.”

“I think the audience was overwhelmed too. I don’t think I’ve ever seen two standing ovations and two encores like that, and I think it would have gone on, but the conductor left,” she said.

With reporting by Cat Rooney.