Director: Shen Yun is ‘A beautiful expression of spring’ 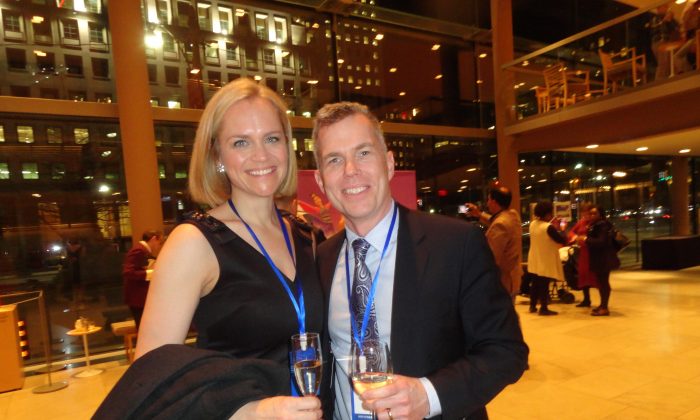 TORONTO–Laura Plant and Adam Watson, both senior directors at major Canadian banks, were impressed by the beauty and depth of Shen Yun Performing Arts on March 26, 2019 at the Four Seasons Centre for the Performing Arts.

“This was our first time here so we really didn’t know what to expect and we were just talking about how captivated we were by everything we saw. The colors were incredible, the music is beautiful, the dance moves stunning, and the storylines really were a surprise for me just how easy they were to follow but how captivating they were as well,” said Plant.

Her husband was also fascinated by the artistry, including the colors.

“This time of year with the spring blooming, this was a beautiful expression of spring with all of the colors and bright dancing. It was absolutely fantastic,” he said.

New York-based Shen Yun has been touring the globe for more than 12 years, bringing to stage China’s traditional culture, believed to have been divinely inspired. From heavenly realms to ancient dynasties and picturesque landscapes, Shen Yun animates this history through vibrant artistry.

Watson also was intrigued by Shen Yun’s ability to not only depict history, but also to connect it with the present day.

His wife was particularly touched by the Chinese dance story “Goodness in the Face of Evil,” in which a young woman is persecuted for practicing the meditation discipline Falun Dafa, which is being suppressed by the communist regime in China today.

“It was so painful for her and everything had been robbed from her, but in the end, it was her love of her spiritual beliefs that brought her back. And you could see that come through in the performance. It was a beautiful performance,” said Plant.

She took this as inspiration for her own life.

“I think it’s really a reminder for me about being true to my core … that we’re all going to be taken off course in our lives by adversity and various things, but to remember who we are and our core. And to believe in that will get us through in those times,” she said.