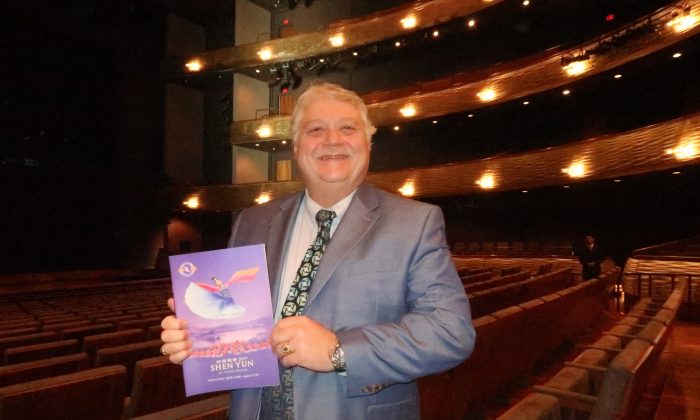 DALLAS—Jamie Shelton is the Director of Corporate Accounts at Regus IWG, a company that offers workspaces.

Shelton had heard wonderful things about Shen Yun Performing Arts, and he watched Shen Yun perform for the first time on Jan. 21 in Dallas at the Winspear Opera House.

“It was amazing,” he said. “It was absolutely beautiful. The grandeur, the backdrop screen. It was fantastic.”

What appealed to Shelton most but the “spirit of the play.”

“There seems to be a great deal of tranquility with the art,” he said. “Obviously the performances were amazing. Just the ability to be dedicated to the dance. It was wonderful.”

Shen Yun Performing Arts has a vision to revive the traditional 5,000-year culture of China, and to share it with people around the world. Traditional Chinese culture is based on Buddhism, Taoism, and Confucianism, and the values that were illustrated through each dynasty, such as loyalty, kindness, filial piety, and reverence of the divine.

Shelton saw many values in Shen Yun that resonated with him as a spiritual person, such as the depiction of a Creator in Chinese civilization.

“What we see is the Creator, and the fact that the play portrays: be good, go to heaven, be redeemed, they’re very similar concepts,” Shelton said.

“And I think if we all just realize we do all believe in a God, a Creator, although maybe by different names, it would certainly bring more people together. If you understood that there’s more alike than difference.”

Shelton said he would like to see the essence of Shen Yun reach as many people as possible.

“Obviously it’s the first time I have seen this play, but I’ve heard a great deal of wonderful things about it. So I would like to see a sense of enlightenment that this brings, to go out for as many people as can see it. Certainly.”

Also in attendance was the Muzzo family. David Muzzo is a private investor who has co-founded several companies. The couple had heard about Shen Yun Performing Arts from acquaintances.

“We’d heard really good things from other people we knew that had seen it.” said Muzzo. “We heard it was really great, so we thought we’d give it a try.”

It was also their daughter’s love of dance that brought the family to see Shen Yun.

“She loves the ballet and all kinds of dancing and she loves music so we wanted to introduce her to some performances,” said Muzzo. “She’s seen stuff on TV but this is her first time she’s come a real theater and gotten to see professional performance live. And she really enjoyed it.”

Muzzo said that Shen Yun was more light-hearted than he thought it would be.

“It was funnier than I expected,” he said. “There were some funny elements to it. And laughing. So I enjoyed it.”