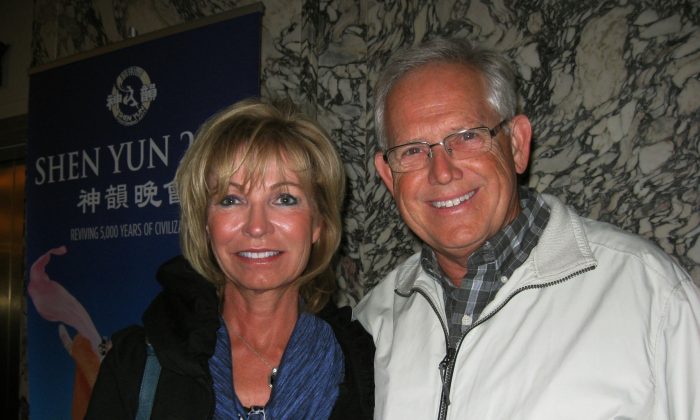 ‘Different than anything I’ve ever seen,’ Says Omaha Businessman

OMAHA, Neb.—Bob and Patty Henrichs attended the afternoon performance at the Orpheum Theater of the premier traditional dance and music company, Shen Yun Performing Arts, on its 2014 world-tour.

It is “spectacular—visually, musically, their physical attributes—all of it. I loved it,” said Ms. Henrichs about Shen Yun.

“Very colorful. I don’t know how to say it; it was very fun. Good music. It was just different than anything I’ve ever seen,” Mr. Henrichs said. He is owner and president of Wally Company, a manufacturers’ representative and distributor business located in four cities.

According to the program, “China was once known as the Divine Land, its glorious culture said to have been brought down from the heavens. But under the last 60 years of atheist communist rule, this divinely inspired culture has been almost completely destroyed.” Shen Yun’s mission is to revive true Chinese culture through the performing arts.

Ms. Henrichs felt Shen Yun’s mission is important specifically: “I think it is very important get their feelings and beliefs out to the public of those events, people don’t comprehend what is going on,” she said.

Several of the nearly 20 dances and songs that make up the evening’s program depict the current struggle in China of Falun Gong against it persecution at the hands of the Communist regime. Falun Gong (also known and Falun Dafa) practice meditative exercises and live by the principles of truthfulness, compassion, and tolerance.

As to the importance of spirituality in today’s society, Ms. Henrichs said, “It has to do with each and every one of us in our own way no matter who we are, where we live, what we are, all of it.”

The Henrichs highly recommend Shen Yun to others.

“I would say to family and friends definitely go see it,” she said.

“I think you will love all aspects of it, it’s not what you would think of as far as an ongoing plot [as] the scenery is different, the artistic elements are different, so it’s something new!”

Mr. Henrichs concluded, “It is really different from anything I’ve ever [seen], but I really enjoyed it.”