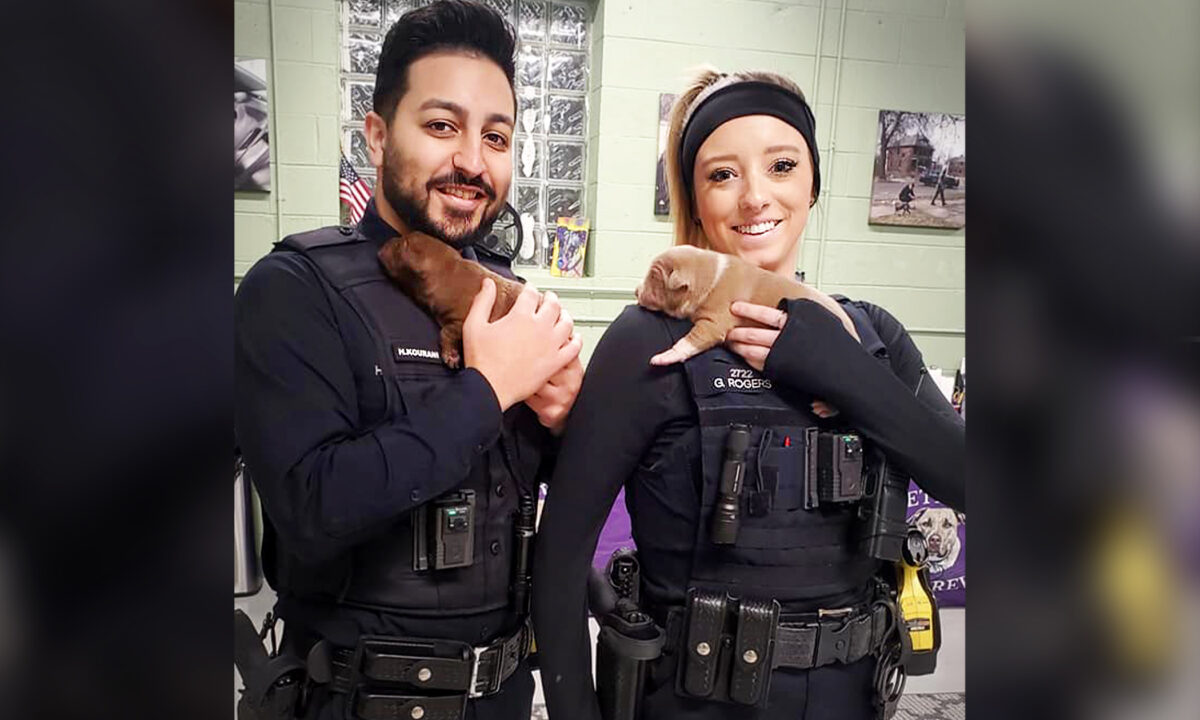 Responding to a call about a “vicious dog” outside a boarded-up house the day after Christmas, two Detroit Police officers found a female pooch who was “nowhere near that” lying on the grass outside.

But upon entering the house, they made a surprising—and adorable—discovery.

The two officers, H. Kourani and G. Rogers, at about 5 p.m. arrived at the scene and found a female four-legged friend, about 1 year old, who seemed malnourished.

Rogers noticed the dog’s mammary glands were very swollen and filled with milk, which could only mean one thing: puppies.

In order to gain her trust (and find the puppies), Officer Rogers fed her some dog treats which she keeps in her cruiser in case of such a canine encounter. The poor mom soon warmed up to Rogers and began eating from her hand.

After gaining the momma’s trust, they entered the vacant house and immediately spotted a furry female puppy.

“As soon as we turned that first corner into the living room, we saw a tiny brown puppy laying on top of a beat-up mattress,” Kourani told Fox News.

After picking her up, they found her brother inside the mattress, stuck inside a spring. “I just used all my force to break it off his neck,” said Officer Rogers. “He did whimper a little bit once I got it off, but I think that was a sense of relief.”

After taking the momma pooch and her two puppies out to get medical attention, a veterinarian told them they probably wouldn’t have lived through the night as temperatures were expected to drop below freezing, Fox News reported.

The sweet dog family were taken to Detroit Pit Crew Dog Rescue, where they would be cared for—hopefully with better days ahead.

“Her body condition was very bad when we got her, so she definitely needs to put on some weight,” said Teresa Sumpter, executive director of the dog rescue. “But she seemed otherwise healthy.”

The pups would have to remain with their mom until they are around 8 weeks old, Sumpter added, at which point the rescue will seek adoptive forever homes for them.

The rescue posted photos of the officers and furry family together on their Facebook page to give credit where credit’s due—and let the world know about the pups in need.