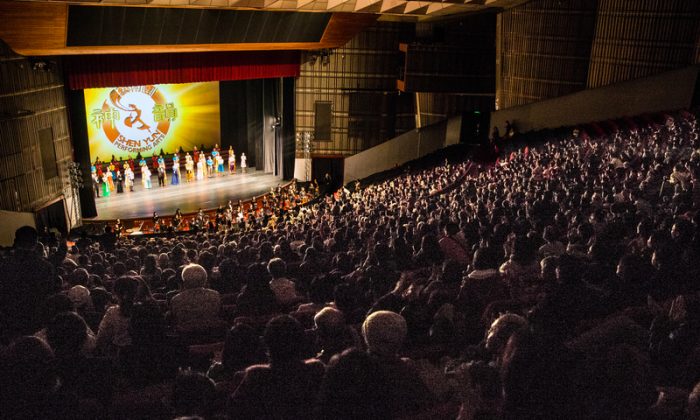 TAIPEI, Taiwan—Deputy Minister of Health and Welfare Shiu Ming-neng, together with his wife who is an assistant professor at Asia University, attended Shen Yun Performing Arts International Company’s 2014 final show in Taipei at the National Dr. Sun Yat-sen Memorial Halls on the afternoon of Feb. 27.

New York-based Shen Yun brings 5,000 years of Chinese civilization to the world, through both music and dance: classically trained dancers, award-winning singers, and a full orchestra comprised of both Eastern and Western instruments.

Moved by the exquisite performance, Deputy Minister Shiu said that “It blended the 5,000 years of Chinese tradition and the essence of dance, and then integrated it into their dances. It let us see the historical legends as well as the heritage they carried forward.”

It was his first time seeing Shen Yun. “It’s very rare for my wife and me to see such authentic traditional Chinese dance performance. The show was extremely exquisite and spectacular. The dance was really wonderful,” he said.

Speaking of a specific dance, Ladies of the Tang Palace, he exclaimed, “Wow! I felt like I had returned to the time and space of that era, as if I were the emperor in the Tang Dynasty, and was enjoying this superb dancing and singing in my palace.”

“The synchronization (of the dancers with the animated digital backdrops) in the dance Ne Zha Churns the Sea was indeed seamless,” he said.

He thought the vocal soloists singing was really amazing.

Mrs. Shiu echoed her husband, saying, “Excellent! Wonderful! The overall arrangement of the dancing programs was fantastic. The dances were magnificent. In addition, the inclusion of the plot of some legendary stories made the performance more meaningful and interesting.”

“Because people may not really understand how magnificent [Shen Yun is], I’ll recommend that my friends see the show. After all seeing is believing,” Deputy Minister Shiu said.

A Lifelong Happiness Made Possible with Shen Yun

“I am so happy to be here today. Next time, I will bring my children along. For something that you cannot learn from textbooks, something that is very distant, we have to try to bring it closer to us. So, I think [Shen Yun] is quite a rare opportunity,” said Li Kuigong, CEO of Architecture World, after seeing the performance on Feb 27.

“I think I should share this with my children. This is something that can truly bring lifelong happiness,” he added.

What Mr. Li saw in Shen Yun was similar to rain after a long drought. “Rarely do I come to contact with traditional Chinese culture in Taiwan. Especially in schools today, we have are so far from where we used to be. This [Shen Yun performance] seems like it came right out of the textbooks that we had back when I was a student,” Mr. Li explained.

Mr. Li said that Shen Yun was like a fresh breeze, saying that “This fresh breeze that I just mentioned, it could awaken our cultural passion, allowing us to think and contemplate.”

Mr. Li elaborated that Shen Yun had reawakened his desire for the glorious traditional Chinese culture. “The costumes were visually refreshing. We have long gotten accustomed to Western culture. I had never realized that Chinese attire could be a thing of such beauty. I even got to think about the settings for the different dynasties.” Mr. Li said.