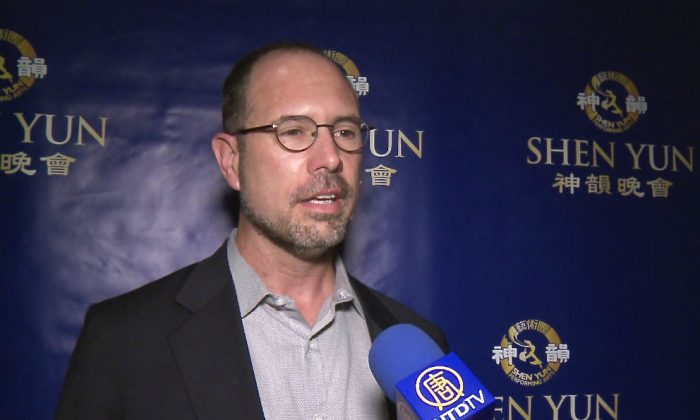 Greg Autry shares his Shen Yun experience at the Segerstrom Center for the Arts, on March 12. (Courtesy of NTD Television)

COSTA MESA, Calif.—Greg Autry, entrepreneur, educator, and author of the book Death by China highly enjoyed watching Shen Yun Performing Arts, and applauded it for being independent of the Chinese communist regime.

Shen Yun was formed in 2006 by a group of leading classical Chinese artists in New York who aimed to revive China’s true culture. Being outside of China, the company enjoys artistic freedom, and travels the world with its exhilarating performances, treating audiences worldwide with its stunning choreographed classical Chinese dance and soothing music.

“I love the music, I love the color, the pageantry,” Mr. Autry said about Shen Yun, after watching it at the Segerstrom Center for the Arts on March 12.

“It’s wonderful to see Chinese stories told in a way that doesn’t involve [Chinese] government policies laid on top of it or communist propaganda used to bend the meaning,” he added.

“It’s good to see Chinese people to be able to express their own culture without the corruption that we’ve seen in the recent years.”

Mr. Autry, an adjunct professor of entrepreneurial studies at the University of Southern California, has spent a lot of time in China, and seen the situation people live under the rule of the Chinese Communist Party. The book Death by China, which he co-wrote and also produced a movie based on, focuses on how China abuses human rights and poses threats to the global economic stability and world peace.

“I spent a great deal of time in China over the last ten years and I enjoy many times and experiences with real people when you get away from your minders and you get away from people who want to show you the fake China,” Mr. Autry said.