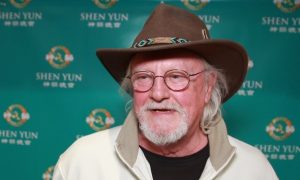 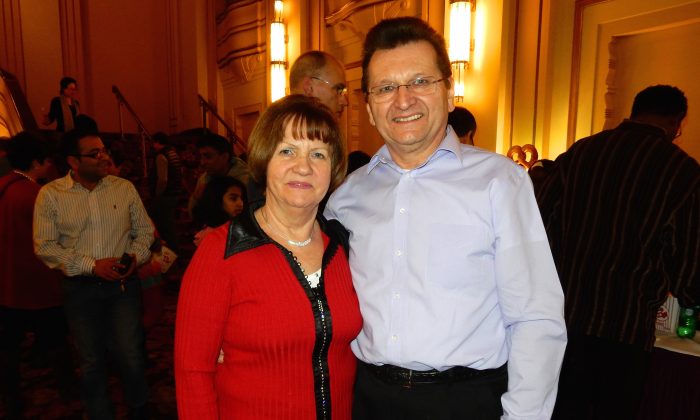 Donna and Joe Tabor enjoyed Shen Yun Performing so much that Mr. Tabor will call his family in Chicago and tell them they must see the Chicago performance in March. (Stacy Chen/Epoch Times)
Company

They invite their neighbors, too
By Epoch Times Staff
biggersmaller
Print

DAVENPORT, Iowa—Davenport, Iowa’s front porch, sits, along with Bettendorf, right on the Mississippi and looks across at Illinois and its sister cities, Moline and Rock Island. This gem of the Quad Cities is hosting Shen Yun Performing Arts for the first time, from Feb. 17-18, and for that reason, theatergoers didn’t know what to expect on opening night.

Even though Joe Tabor, a plant manager at Illinois Tool Works, said that he didn’t know what Shen Yun would be like, the traditional Chinese dance and music company still surprised him. “This is above my expectation,” he said.

Defying expectations seems to be a good part of what New York-based Shen Yun does best. The foremost classical Chinese dance company in the world brings its all-new choreography and original music to more than 100 cities every year.

And every year Shen Yun incorporates the ancient traditions and values of China. Each dance in the 20 or so music and dance pieces either showcases folk dances from various Chinese ethnicities or depicts legends, myths, or actual stories from the country’s 5,000-year-old civilization.

Of Polish heritage, Mr. Tabor who attended Adler Theater with his wife, Donna, has always been fascinated by Chinese culture. So he appreciated learning about the different peoples of China: “I will take that back with me. That’s something that you don’t see on a day to day basis.”

Every year, too, it seems, people are touched to the core by what they see and hear.

“It is a stunning, exquisite performance,” Ms. McBride said, mentioning the striking choreography and costumes.

But what moved her was the programs’ spirituality. “The spiritual aspect was absolutely breathtaking and very hopeful, … Heart wrenching, very heart wrenching, beautiful,” she said.

Some of the programs’ spiritual messages lie in the music. Joining the dancers are a few award-winning vocalists, who sing of the soul’s yearning for the divine. The lyrics are projected behind the singers.

Brian Adams, a senior business development manager at ADS Inc. in from Geneseo, Ill., and his wife, Faith, expressed some thoughts about the program’s spirituality.

“It reminds us that for all of us, no matter what culture, no matter what god or gods we worship, that we all have that in common to some degree. So it’s good to see that,” said Mrs. Adams.

Despite this benign message, Shen Yun is currently not allowed to perform in China.

According to the company’s website, “Over its past 60 years of rule, the communist regime has treated traditional Chinese values centered on the idea of harmony between heaven and earth as a threat to its existence. And in its systematic campaigns like the Cultural Revolution, it has uprooted traditional beliefs and destroyed ancient treasures bringing traditional 5,000 years of civilization to the brink of extinction.”

Wendi Mitchell, an account executive at KWQC TV-6 News, shared her opinion on this history. “I like our freedom, and it’s very, very sad that they don’t have the same thing in China … heartbreaking,” she said.

Brian Adams agreed. One dance, The Power of Compassion, particularly spoke to him. In it a person practicing a spiritual meditation discipline is attacked by police. Instead of fleeing, the person helps a policeman who’s been hurt in the fray.

Thus, Shen Yun aims to revitalize the ancient arts and values of a nearly extinct culture, based on harmony between the human and the divine.

Would Davenport attendees recommend this performance to their friends?

“I would highly recommend it; it’s amazing,” Ms. Mitchell said.

“I have been encouraging … my family in Chicago, and I’m going to call them and tell them they need to see this,” Mr. Tabor said.

“We would definitely recommend [our friends] come,” Mr. Adams said.

“Yes,” agreed his wife. “If they don’t have tickets, they can get them and come tomorrow night.”