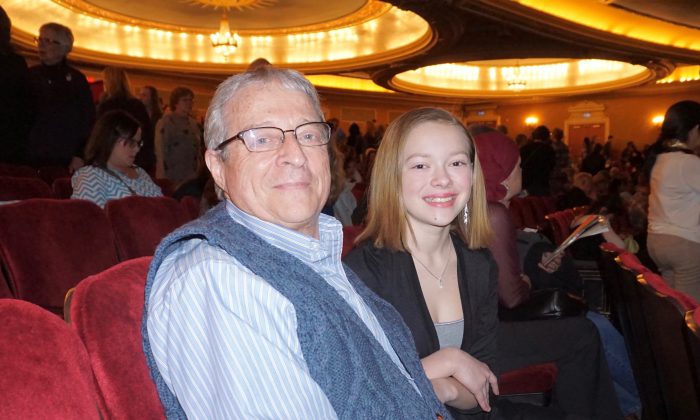 Maury Kapsner with his granddaughter, Anna Kapsner, at Shen Yun at the Orpheum Theatre, on Feb. 21, 2016. (Valerie Avore/Epoch Times)

MINNEAPOLIS—Amateur ballet dancer, Anna Kapsner had the idea to come and see Shen Yun Performing Arts at the Orpheum Theatre, but it was her grandfather, Maury Kapsner, that made it happen.

Fourteen years old, Anna Kapsner has been dancing since she was three or four. Her grandfather is owner of M&L Industries; together they attended the matinee performance on Feb. 21.

A Shen Yun production consists of about 20 vignettes, each immersing the audience into traditional Chinese culture through Chinese classical dance, orchestral music, beautiful costumes and props, and digital interactive backdrops.

On their way to the performance they talked about how each culture has a spiritual background and how that drives each culture. Mr. Kapsner found it very interesting and insightful to see this actually portrayed through Shen Yun’s music and dance performance.

“Classical Chinese dance,” according to Shen Yun’s website, “has helped preserve 5,000 years of Chinese culture. Built on traditional aesthetics, it was once passed down among the people, in imperial courts, and through ancient plays. Over thousands of years, it was constantly refined, eventually developing into the vast and distinctly Chinese dance form we know today.”

As a dancer herself, Anna said she can truly appreciate the difficulty of the jumps and flips performed masterfully by the Shen Yun dancers.

“It’s incredible, oh my goodness … I just think it is really, really fascinating,” she said.

“I find it so fascinating and I love learning about other cultures … it’s just so beautiful, the costumes, the dances, the stories, I just love it all, it’s so cool,” she added.

One of the aspects of the performance that really stood out to Mr. Kapsner was the spiritual connection in the Chinese culture depicted throughout the performance.

“It was interesting to see how the singers portrayed the spiritual background of the Chinese and the belief in Buddha.” He thought it was very interesting how some of the heavenly scenes showed a belief in a number of divine beings that come down from heaven and are part of the culture as well.

“The power of the spirit is amazing in every culture,” he said.

Anna had a message for her parents about the performance. “I am going to tell them they need to drop everything and come see this. It’s just absolutely beautiful,” she said.

“My parents have a great appreciation for other cultures and a desire to learn more about them in order to understand the people, so I think they would really appreciate this,” she concluded.