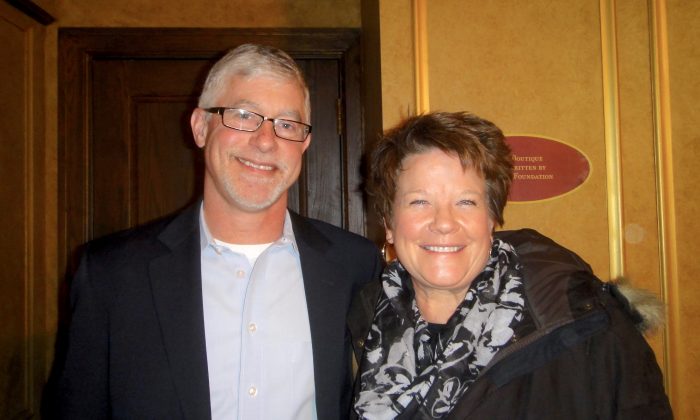 DETROIT—”They were just incredible! It was beautiful! Truly one of the best I’ve ever seen! Yes!” exclaimed Debbie Renton, after seeing Shen Yun Performing Arts with her husband Howard at the Detroit Opera House on Jan. 2.

The couple were full of praise for the artistry and beauty of the performance, excitedly complimenting every aspect of the production from the classical Chinese dancing to the live orchestra and vibrant costumes. Breath-taken, Mrs. Renton said, “It was delightful, just delightful!”

They particularly enjoyed the animated backdrop, which uses state-of-the-art technology to seamlessly complement the performers on stage and the live orchestra. “It’s the first time I’ve ever seen a dance performance that integrated culture and media,” Mrs. Renton said.

Mr. Renton, a health care consultant, agreed. He found it fascinating to see how the characters on the screen would then appear physically on stage. “It was quite incredible!” he said.

I learned so much about the culture.
— Debbie Renton

The two also loved the rich and authentic Chinese culture conveyed by the performance. “It was so informative, too.” Mrs. Renton said. “I learned so much about the culture.”

Through music and dance, New York-based Shen Yun presents authentic Chinese culture, steeped in faith, spirituality, and moral values like compassion and forbearance. With myriad different scenes from ethnic tribes and ancient legends to heavenly realms and imperial courts, the performance takes audiences on an uplifting journey through China’s history, as its website states.

Captivated by every aspect of the performance, Mrs. Renton said, “We will be back next year, absolutely!”

Mrs. Renton wasn’t the only dancer who loved the performance.

Meghan Parkinson, a dancer for the Michigan Ballet Theater, similarly fell in love with Shen Yun—so much so that she could find no language to express her feelings. “It was just so good. No words,” she said.

Listening to the live orchestra, she felt the performers on stage really captured the emotions and the essence of the music physically on stage. “They really portray it well and express it so the audience can understand everything,” she said.

Shen Yun places a great emphasis on “bearing,” a key aspect of classical Chinese dance, which refers to the inner spirit and expressiveness of the dancing. As the Shen Yun website states, “Bearing emphasizes internal spirit, breath, intent, personal aura, and deep emotional expression. In essence, the spirit leads form, so that form is imbued with spirit.”

Ms. Parkinson also found inspiration for her own dancing from watching the Shen Yun dancers. “I’ve learned a lot as a dancer. I’ve grown seeing their stage presence and how they present themselves.”

Her father, Matthew Parkinson, a company manager, said, “The artistry’s absolutely beautiful. The choreography’s fantastic. We really enjoyed it.”

The richness of the culture is what’s really impressive.
— Matthew Parkinson

Like Mr. Renton, Mr. Parkinson loved the depth of the culture portrayed on stage. “The richness of the culture is what’s really impressive,” he said. “And that was very apparent in the dancing and the choreography, the music, and the costumes.”

Not only did Shen Yun deliver a stunning depiction of China’s history, it also “showed the struggles to be able to bring that history to the world. And hopefully get that back in China as well,” he said.

Mr. Parkinson lauded the company for showcasing Chinese culture to audiences worldwide, especially as they are banned from performing in China, the very country they display so beautifully on stage. For many decades, particularly during the Cultural Revolution, the Chinese Communist Party has persecuted traditional Chinese culture and suppressed ancient Chinese values about faith and spirituality.

“We’ll definitely be back again, that’s for sure. We enjoyed it thoroughly,” Mr. Parkinson said. His daughter promptly agreed. “Definitely will be telling our friends and family to come see the show,” he added. “It’s excellent.”