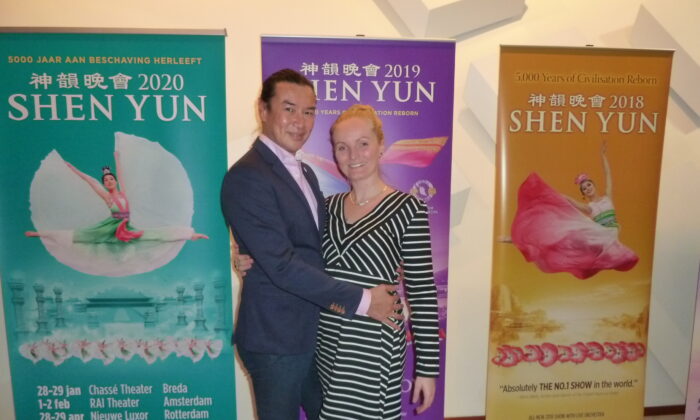 AMSTERDAM, Holland—Yu and Pauline Shou are both dancers, so the opportunity to see the world’s top classical Chinese dancers was one they could not pass up. After seeing New York-based Shen Yun Performing Arts at the RAI Theater in Amsterdam, Yu said, “I can only describe it with superlatives.”

“Magnificent, it was absolutely fantastic,” said Yu after the last of three sold-out Shen Yun performances in the city on Feb. 2, 2020.

“They were so in sync, it was presented so very straight, the nimbleness, and all of it so light. It was really unbelievable. This is from an unparalleled level,” he said.

There is dance and there is music and internationally speaking you don’t need words.
— Yu Shou

“I also believe it is so special because there are certain characteristic elements in it that are typically Chinese,” he said. “There is dance and there is music and internationally speaking you don’t need words. You don’t need subtitles to understand what is happening on stage. I found it absolutely magnificent.”

He saw in Shen Yun ancient myths and stories and vignettes that captured the essence of China, the ancient civilization of 5,000 years that so many of us, including Yu who has some Chinese ancestry, are unfamiliar with. It entertained as well as informed, Yu said.

According to Shen Yun’s website, this is exactly the goal. The classical Chinese dance company’s mission is to revive traditional Chinese culture and share it with the world through the universal languages of music and dance. It is a divinely inspired culture, and the scenes in Shen Yun include deities and heavenly scenes and arts that were believed to have been passed down to humankind by the divine.

Yu said that while the performance and culture were lofty, there was also humor and attention down to the details that made it at once both a playful and impressive performance.

“From my perspective as a dancer, I would recommend other people to go see it. But also from the perspective of a non-dancer, there are more than ample elements in it,” he said, calling Shen Yun an artistic achievement.

Pauline was moved by the performance, both on an impressive technical level, and also by the emotions and efforts of the artists behind it.

“It was very impressive and very tangible because we could see that the dancers were doing it with their heart and soul,” she said. “It is very beautiful to see how elegant and supple and in sync, the dancers were dancing.”

“They are a group of people who very strongly form a team,” Pauline said. She saw in the artists “a certain belief that gives you inspiration and keeps you going, the good and the evil, the yin and the yang, constantly looking for balance between yourself and the environment, and everybody you meet. I feel that that is really central to the dance as well, that is what I have seen.”

“I can only say I was really impressed by all the things that went on and how it was expressed—beautiful,” Pauline said.

With reporting by Gohkan Tunc.