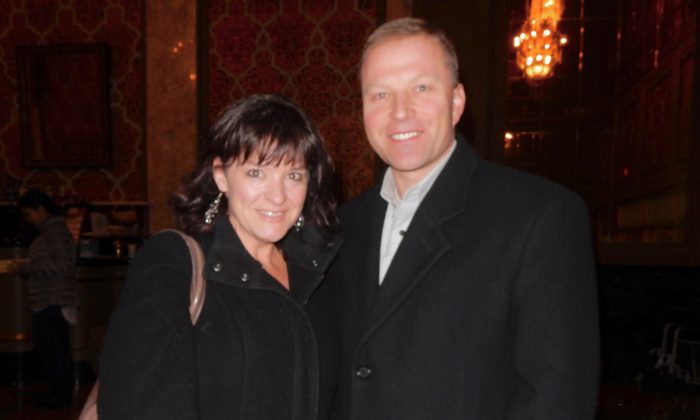 KNOXVILLE, Tenn.—A seasoned dancer, Christina FitzWilliam had danced country western, jazz, and clogging for thirty-five years before recently retiring. With over three decades of dancing under her belt, she saw Shen Yun Performing Arts with a trained eye—and she was thoroughly impressed.

“It was incredible. The costumes were amazing. The choreography was out of this world. Every second of it was just beautiful,” she said.

Amazed by the synchronicity of the performers, she said she would love to meet the choreographer and the person who polished all of the movements. “Every hand motion was perfect. Every foot that came up was the exact height. It was just flawless,” she said.

“Best show I have ever been to in my life—by far. Absolutely amazing.”

Her husband, John, the owner of Surface Doc Inc., a cleaning business, also appreciated Shen Yun. “It was really enjoyable to watch,” he said. “I love the story-line. I love the messages that were given.”

Traditionally the Chinese believe that their culture is divinely bestowed, and artists often used art to honor and venerate the gods—a characteristic also central to Shen Yun’s performance.

The website states, “Mortals and divine beings merge on stage as one. Principles such as benevolence and justice, propriety and wisdom, respect for the heavens, and divine retribution, all come to life, washing over the audience.”

The FitzWilliam couple are Christian, they felt the universality of the spiritual themes within Shen Yun and felt it was good to revive those virtues.

“I can relate to their desire to give honor and respect and gratitude to the Creator, and recognize Him in all things. And not want to compromise those beliefs, to fit in, or to follow just the norm of everyday life the world keeps putting on them,” Mr. FitzWilliam said. “Every culture has a religion. It is a religion of peace. We love seeing that.”

Mrs. FitzWilliam agreed, saying, “We can fully appreciate this beauty behind the peaceful nature of [their faith],” she said.

Shen Yun is not allowed to perform in China today due to the Chinese Communist Party’s various campaigns to force atheism upon the people. She said, “It is devastating.”

Mrs. FitzWilliam appreciated the orchestra, which uniquely combines a Western symphony with Chinese melodies and classical instruments. “This symphony was just phenomenal, just absolutely gorgeous how they mix the Chinese music and then some of the [Western] elements together. I have never heard anything like that. It was gorgeous,” she said.

Her husband, who has an appreciation for music and opera singing, also applauded the soloists and the orchestra.

He said the orchestra was “Wonderful! Absolutely wonderful!”

“They were wonderful!” Mr. FitzWilliam said, appreciative of not only the extraordinary skill of the soloists but also the profound spiritual messages within the lyrics.

Overflowing with enthusiasm after seeing Shen Yun, Mrs. FitzWilliam said, “I cannot wait to tell everybody how amazing it was. And I definitely want to come back,” she said, with more family and friends next time so all can enjoy the beauty of Shen Yun.