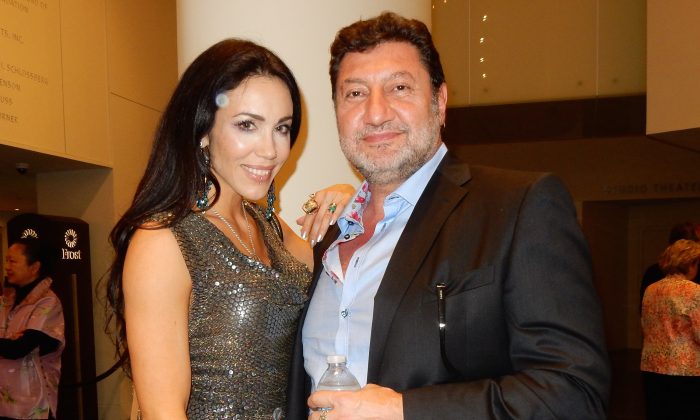 SAN ANTONIO, Texas—Audience members at the Tobin Centre for the Performing Arts were taken on a breathtaking journey through China’s beautiful landscapes and rich history on Sunday evening, as Shen Yun Performing Arts started its four-show, three-day run in San Antonio.

“Amazing, absolutely exquisite, and I am so happy to witness [Shen Yun],” said Ishani Ishaya, a professional dancer.

There were so many elements in the performance to highlight that Ms. Ishaya didn’t know where to begin.

“I am overwhelmed,” Ms. Ishaya said. She said she was moved to tears.

“The woman that was singing made me cry,” she said, referring to the vocal performance by the soprano who uses the bel canto style to sing Chinese lyrics.

But it wasn’t just the vocalist’s voice that caught Ms. Ishaya’s attention. She was also intrigued by the lyrics of the song, which were translated in English and projected on the backdrop.

“China is such a beautiful and ancient culture, it is so sad to see such control happening, and … the yellow flowers need to blossom. So that’s beautiful,” Ms. Ishaya said, referring to the suppression imposed by the current communist regime in China.

As the Shen Yun website states, Shen Yun is more than just an exhilarating performance of sophisticated dance techniques and soothing music. “One discovers a sea of traditional Chinese culture. Mortals and divine beings merge on stage as one. Principles such as benevolence and justice, propriety and wisdom, respect for the heavens, and divine retribution, all come to life, washing over the audience,” reads the Shen Yun website.

One such value that came across for Ms. Ishaya was compassion, as seen in the piece The Power of Compassion, where practitioners of the spiritual discipline Falun Gong, also known as Falun Dafa, who are heavily persecuted in China, show compassion to a police officer who attacks them.

“It is a classic forgiveness, such an undervalued quality. To have forgiveness, it is so, so much more powerful than brute force … It is a very important story,” she said.

Coming out of Shen Yun, Ms. Ishaya said she has took inspiration for her own dance as well as costuming.

‘Dancing is just out of this world’

Clayton Mabry and his granddaughter Madeline were also impressed by Shen Yun.

“It is all marvelous, and then the dancing is just out of this world,” Mr. Mabry said.

“I love the way the multimedia interacts with the performers, and the screen is very well done, and the orchestra is great.”

At times during the performance, Mr. Mabry was touched, and saddened, as he witnessed suppression of freedoms in today’s China. He said it is evident that people have to struggle to follow their faith in today’s China.

“It is very moving to me, and sorrowful at the same time,” he said.

Mr. Mabry said that he would recommend his family and friends to go and see the performance.

“I would encourage anyone to go see it, because it is so beautiful and so unusual.”