Dancer Marvels at Shen Yun: ‘The synchronization of those formations was just fabulous’ 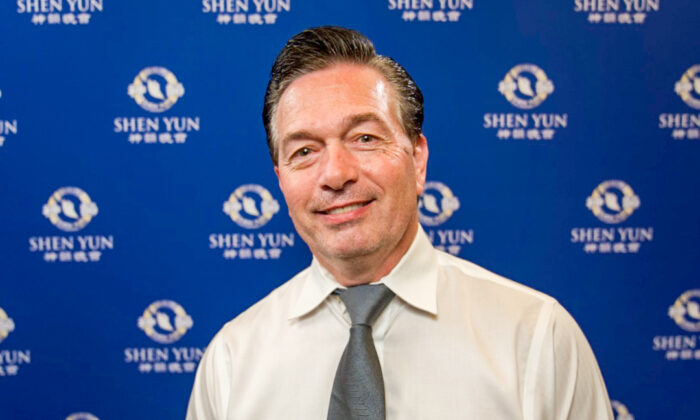 JACKSONVILLE, Fla.—Brent Hyskell is a champion ballroom dancer and owner of Atlantic Ballroom, a dance studio in Jacksonville, Florida. So when he took in Shen Yun Performing Arts on Feb. 22, 2020, it was easy for him to appreciate the years of training and months of rehearsals it took the dancers to perfect the precise timing and astounding formations found in the performance.

“Oh, it’s a fabulous experience because as a ballroom dancer of course I can appreciate the many years of experience that goes into putting on a performance like this, and the synchronization of those formations was just fabulous,” Hyskell said.

A dance by New York-based Shen Yun titled “Water Sleeves” is one among the roughly 20 vignettes that stood out to Hyskell for its unique choreography and form.

Just because it was so perfectly synchronized, and the colors and the vividness of this, just really jumps off at you.
— Brent Hyskell

“The long sleeves and the beauty and the elegance of the graceful movements. I loved it,” he said.  “Just because it was so perfectly synchronized, and the colors and the vividness of this, just really jumps off at you.”

Classical Chinese dance is the ancient and highly-expressive art form that Shen Yun employs as the foundation of its mission, which is the revival of traditional Chinese culture. This dance tradition consists of three components: technique, form, and bearing. Its technique is one of the most challenging in the world; the movements it possesses as part of its form and dance vocabulary are manifold. But its attention to bearing is what really sets classical Chinese dance apart.

“Bearing,” according to Shen Yun’s website, “is the translation of a specific Chinese term (yun) that can best be described as a particular inner spirit. It is formed by a combination of something resembling cultural DNA or an ethnic flavor in Chinese people’s bones, together with the heritage of 5,000 years of Chinese civilization. Bearing emphasizes internal spirit, breath, intent, personal aura, and deep emotional expression. In essence, the spirit leads form, so that form is imbued with spirit.”

Hyskell marveled at Shen Yun dancers’ technique. “The level of technique is really at the top, absolutely at the top. I’ve never seen any better and I’ve seen some great shows in my life. But the gracefulness, the moving across, and of course the technical lines that you see, and the synchronization of these lines. And of course the moments of comedy that were thrown into this. As a dancer, you can appreciate it takes so much experience to be able to switch from one mood to another in a moment. So of course, I love the way they did that.”

“The stories,” he continued, “well, there was so much here to offer with the stories, because again you have the graceful elegant stories, but then you had the comedy stories, but on top of that you had one of your stories that was very serious and almost depressing. And of course, that was what the artists were trying to portray in this, they were trying to portray the levels of persecution … and all of the many elements of such a serious story-line as that one was. So I enjoyed all the different storylines.”

Shen Yun includes ancient legends, folk tales and dances, and also scenes from modern-day China where persecution is taking place against spiritual believers. It aims to wipe out traditional Chinese culture altogether. Shen Yun depicts, in a select number of its many vignettes, the compassion, perseverance, and faith many believers exhibit at the hands of the Chinese communist regime’s brutality.

“I think what it’s doing is it’s sharing with us in America at the moment a whole different flavor of culture that is usually is not seen here. We have ballets and things but never based upon this culture. So, of course, it’s a great educational tool for those who haven’t seen it before, to see the character of the Chinese culture coming out in all of those dances. And of course, the costuming is fabulous,” Hyskell said.

Spirituality pervades Shen Yun’s artistry, since reviving traditional Chinese culture is its mission, and spirituality formed the essence of that ancient civilization.

“Oh I loved it,” Hyskell said about the soulful nature of Shen Yun, “but of course I’m not real knowledgeable in the Chinese culture, so for me, it’s kind of a new experience for me too. Even though I’m in the dance world I don’t get to see this style of dance very often.

“So I just love the experience and of course it brings a lot to light, the different style of their culture, and of course the beauty of the costuming and the fans, and the headdresses, and the lanterns. So much vivid color comes to life in this show that you don’t see in a lot of American shows. So I thought it was quite unique in that sense.

“It’s a great mission, and I think [Shen Yun is] doing an amazing job because I see people talking about this all over the United States when I travel, it’s not just one place. You guys have really brought a revival of this experience to America, and I think it’s something that America is absolutely falling in love with.

Hyskell continued by pointing out even more aspects of what makes Shen Yun so unique and exciting.

“The athleticism—you have to appreciate that this cast is literally in the prime of their athleticism and the production that they are producing is at the highest level of execution for performers. And so, you know, you just don’t see that very often, and so many performers at the same level. What a fantastic performance it is. I loved it a lot.”

What would Hyskell say to Shen Yun’s artistic director and artists themselves?

“Wow, I’m sure you couldn’t say anything other than ‘Bravo, absolutely fantastic performance.'”