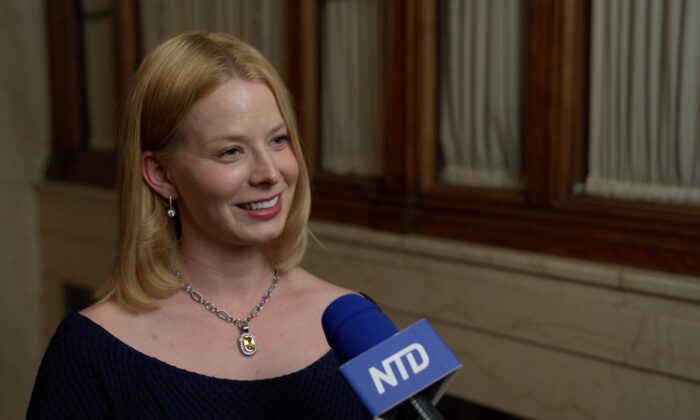 Rebecca Coley at the Benedum Center for the Performing Arts in Pittsburgh, Pennsylvania on Jan. 25, 2020. (NTD Television)

Also known as the Lunar New Year, the Chinese New Year is a momentous occasion, which made it the perfect time for these audience members to watch Shen Yun in celebration of traditional Chinese culture.

Coming from a dancing background herself, Coley was most interested in Shen Yun’s display of classical Chinese dance.

Coley said that Shen Yun’s performance was the most well-executed dance performance she has seen. What she found that led her to that conclusion was that all of Shen Yun’s dancers performed at a high level of skill and grace.

She said, “I mean, not the just the collective precision, but the collective grace. There’s not one stand out dancer in the entire ensemble. They were all stand-out principal dancers, which is very different from all the American companies I see where there’s three or four principle dancers, and it’s apparent that they’re the stars of the company per se, but there’s just this collective skill that I can’t pick out one star, if that makes sense.”

A complete system of dance that has existed for thousands of years, classical Chinese dance is an important element of Shen Yun as well as traditional Chinese culture.

According to the company’s website, this style of dance is an accumulation of profound wisdom from every period of Chinese civilization and has become an embodiment of traditional aesthetic principles which include bearing, form, and technical skill.

“It is exquisite. I keep going back to the same words I used, but it’s exquisite, and there’s a meaning behind every piece that it’s not just dance for the sake of dance. There’s a message behind it, so it’s an experience,” she said.

Not only do Shen Yun dancers practice self-expression, but they also strive to improve themselves every day, in all areas of their life.

According to the company’s website, “There’s something that unites Shen Yun artists beyond performing arts. These artists are also spiritual seekers on a shared journey. They meditate together, study teachings together, and strive to live by the principles of truthfulness, compassion, and tolerance.”

Coley believed this part of Shen Yun was very prominent in the performance, especially in the dance, “Abetting the Wicked”, a story about practitioners of Falun Dafa undergoing persecution by the Chinese Communist Party.

“It clearly must make a difference, because again, there’s a different spirit to the show than other dance performances that I’ve seen, so there’s something special,” she said.

Coley added, “The message I received from it is the ability to rise above, and the ability to find grace and beauty despite what you have to face in this world. I think that was the strongest takeaway.”

With reporting by NTD Television and Don Tran.