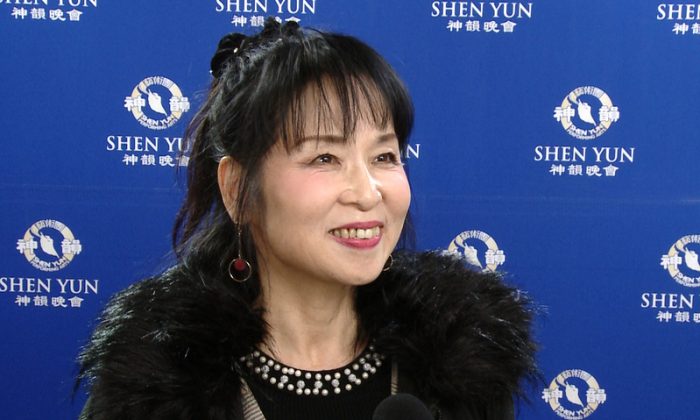 “While watching the show, I could not help but burst into tears,” said Japanese dance teacher, Masako Okazaki after seeing the performance by New York-based Shen Yun Performing Arts at the Orix Theater in Osaka, Japan on Jan. 21.

She said the dance and the music were just so perfect that she was completely absorbed and touched.

Okazaki said she was deeply moved by the Shen Yun performance last year, so she couldn’t wait to buy the ticket early for this year’s show. She expressed her contentedness and luck for having the opportunity to pick a good seat.

“I feel both body and mind are fulfilled, even at present,” she said after the performance. Okazaki said had a lot to bring home tonight.

Okazaki marveled at the masculinity of the male dancers.

“The male Mongolian dance was agile and powerful,” she said. “The dance movements imitating horse riding showed the dancers’ superb dance skill. They are of the top level, no lesser than the Olympic athletes.”

As introduced in Shen Yun’s official website, Mongolian ethnic dances can be some of the most dynamic and breathtaking numbers in Shen Yun performances. The Mongolian ethnicity is known for its affinity to horses, and so the traditional dance of this nomadic group is replete with movements of the horse. The feel of Mongolian dance is sprightly, bubbling with energy and enthusiasm.

Each Shen Yun program contains some 20 vignettes, including stories that span China’s 5,000 years of divinely inspired civilization, and regions and ethnic groups from across the land.

For the funny and humorous parts in the program, Okazaki thought it was a spectacle from her perspective as a dancer.

“Most people don’t know that it is technically more difficult to present funny artistic effects using the body language of dance. Those dancers must have undergone extraordinary training.”

She was surprised that the digital backdrop and the performance on the stage were matched seamlessly. “It was amazing that people can go into and come out from the backdrop.”

With state-of-the-art graphics technology, Shen Yun’s digital-backdrop team creates vividly animated settings, extending the stage and transporting the audience to a world where heaven and earth are one. The backdrops are magical windows to completely different realms. They lead the audience to a journey of different time and space, according to the Shen Yun’s official website.

Okazaki was most impressed by the stories representing modern society. She said on the stage, it showed “people holding [and watching] the mobile phones and walking around with indifferent expressions. It was stunning that classical dance can so thoroughly and vividly express the indifference and numbness between people in the modern society.”

“I was as if suddenly awakened by the Shen Yun performance, realizing that while people in the modern society are busy and live mechanically, it is actually not normal,” she said.

With reporting by NTD and Sunny Chao.