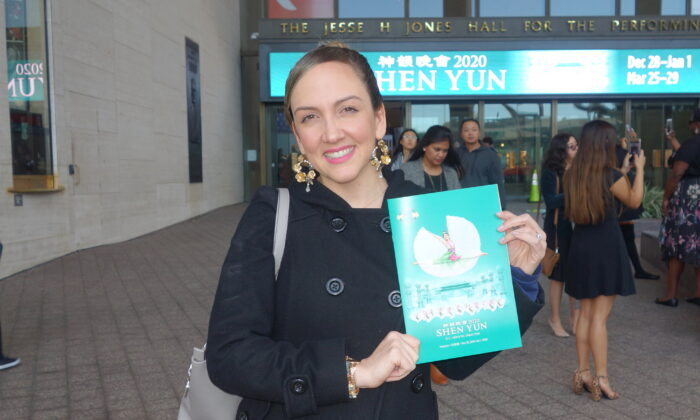 That’s one of the reasons Shen Yun Performing Arts touched her so deeply: Many of Shen Yun’s artists are immigrants themselves, reviving China’s authentic culture through dance and music in the United States.

Urbaez, who attended New York-based Shen Yun’s show at Houston’s Jones Hall for the Performing Arts on Dec. 29, 2019, had glowing praise for the performance.

“It was actually beautiful. The technique was on point. The choreography level was beautiful. The formations, the outfits, the scenery, the set design, so simple yet so nice,” said Urbaez, who has choreographed more than a dozen works of dance and performed them across the United States and internationally with her troupe Danmar Dance Company. June 16, 2018, was proclaimed by the mayor of the city of Houston as “Maria Fernanda Urbaez Day” in honor of her.

Shen Yun depicts authentic Chinese culture, which believes in heavenly realms and the existence of a Creator. Urbaez appreciated this aspect of the show very much.

“I can connect to it. It can be a controversial topic here in the U.S. because of the melting pot of different cultures but to me, being Catholic and now living here in the U.S. for so many years, it actually doesn’t make me feel uncomfortable. If anything it makes me feel that I would like to keep my roots as well.”

We say in Spanish, ‘Devino.’ It’s like you feel like you’re at home. Even though I’m not from there, I can picture being there and feeling comfortable.
— Maria Urbaez, a celebrated Houston-based dancer, choreographer, and producer

“Being an immigrant here, now I’m a citizen, but it kind of taught me to feel that I want to keep my roots, I want to keep doing that. I want to teach my kids to feel OK with where they are coming from and their background. I think it’s interesting for me to see how [Shen Yun] is defending it, still trying to keep it 5,000 years later. Whoever criticizes that, it’s like ‘whatever.’ You need to believe in something, it doesn’t matter what it is. I think it was a nice touch. It makes it very unique,” Urbaez said about the spirituality in Shen Yun.

“I think for me, the ‘divine’ I know in English might have a different connotation, but in Spanish, the word ‘divine’ its exquisite, it’s very elegant and sweet, so that’s usually when we say in Spanish, ‘devino.’ It’s like you feel like you’re at home. Even though I’m not from there, I can picture being there and feeling comfortable.

“It was beautiful. Everything, everything, The softness of it. I wanted to learn a little bit more background about how the inspiration in Chinese culture comes from higher realms. … I think that all the times the angels coming out [on stage]—I’m interested now in learning a little bit more about it, so I think I’m going to go home now and study it,” Urbaez said.

The award-winning dancer thoroughly enjoyed the music of the evening. Shen Yun’s seven touring companies each travel with a live orchestra. The company’s musical legacy is unique in the world because of its integration of full-scale Western orchestration with Chinese instruments and melodies.

“The music was flowing beautifully—it’s like you’re in a dream. It was very well done, I loved it,” Urbaez said.

Urbaez, an expert in a variety of world dance traditions, loved seeing and hearing the authentic Chinese culture that Shen Yun presents.

“I’m very in love with cultures, because I’m originally from South America, so I’ve always been very obsessed with different cultures, and the fact that it brings you to their culture, and they are teaching you as you’re watching it. It’s beautiful. I thought it was divine. It was very exquisite and delicate, it was beautiful,” Urbaez said.

“Keep entertaining us. Keep teaching the world about their culture and their roots. I think it’s beautiful and I wish other countries should be doing the same. To keep the same base and not let it fade. After so many years, it’s like it disappears, and the new generations forget about it. I think it would be great for them to keep on going and I’m excited that I got to come and enjoy it so I hope they keep growing for many more years.”

With reporting by Sarah Guo and Brett Featherstone.