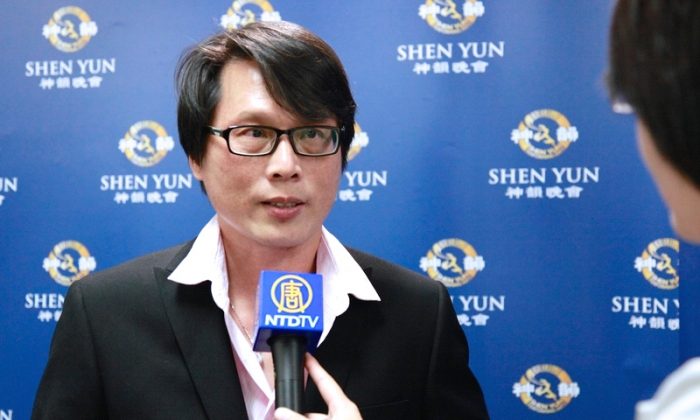 “Shen Yun performances help audiences around the world understand Chinese culture. I am very proud of being a Chinese,” he said.

“I would like to use three words to describe the fabulous show tonight: truthfulness, compassion and forbearance.” He explained, “Truthfulness means truthful display of our traditional Chinese culture; compassion refers to performing the best part of it perfectly; forbearance denotes that it is Shen Yun performers’ dedication and perseverance that they are able to perform so marvelously.”

“These dancers must be very serious about dance and culture, so that they persevere like this. Generally speaking it’s not easy to make it.”

Captivated by Shen Yun’s spectacular performance, he said, “They are performing from the bottom of their hearts. After seeing it, I am truly touched.”

Talking about the fact that Shen Yun artists vividly exhibit historical legends on stage, Chen Jiaxing noted, “The vividness and vitality of the piece Capturing Arrows with Boats of Straw impressed me deeply.”

Regarding Shen Yun’s demonstration of various Chinese ethnic groups’ characteristics and culture through dance, he said, “They must understand them and conceive (the ideas) first and then create the program. What amazed me most is the fact that they put out an entirely new lineup of dances every year.”

In the end, he said that “Everyone should see Shen Yun and be inspired.”

“It will be of benefit to our lives, and can uplift our spiritual levels.”

“Truly exquisite! These young artists are truly outstanding. The choreography is also well done. All of them have a very good foundation and are well trained,” said Guo Liren, President of Beautone Co., Ltd., after he saw the Shen Yun show on April 3.

“It’s very special to incorporate historical legends into a performance, which moved me very much.”

“These performers, through classical Chinese dance, expressed emotions perfectly, such as the process of struggle with problems of trust and distrust between Zhuge Liang and Lu Su. They were depicted so delicately that they deserve attentive appreciation,” he shared about the piece Capturing Arrows with Boats of Straw, based on a historical story.

He also loved the dance Mighty Monk, the story about a Shaolin Temple monk who gains divine power. He said, “The Shaolin monk’s chivalric story is marvelous. With spiritual beliefs, people would have a better balance between their spiritual and material lives.”

He acclaimed the perfect synchronization among the live orchestra, actors’ performance on the stage, and the dynamic backdrops, saying, “The transition between reality and virtual reality was very delicate. It’s a very special artistic performance.”

When it came to the piece The Power of Compassion, he said, “A just cause enjoys abundant support. Heaven will always support optimistic and positive forces.”