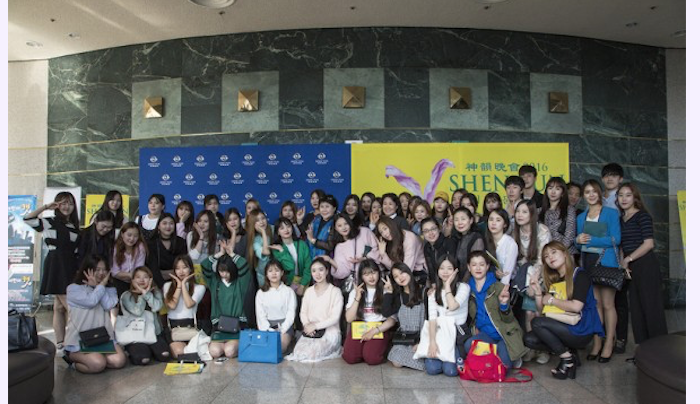 ULSAN, Korea—A big fan of Shen Yun brought more than 70 students to see the show. Professor Zheng looked excited and satisfied while entering the hall with her students after seeing Shen Yun’s second performance at Ulsan Culture and Arts Hall on the afternoon of May 4, 2016.

Having seen Shen Yun three times, she took photos with her students to record this historical moment for her. “‘If you want to have no regrets for your life, you must go see Shen Yun and learn from it,’ I told my students,” said Professor Zheng.

If you want to have no regrets in your life, you must go see Shen Yun.
— Dance professor, Zheng Yu-Ying

She told the reporter her students could be good dancers of Korean dance only by understanding Chinese dance and other countries’ dances.

Ms. Zheng Yu-Ying, professor of the Art Institute of Changwon University, has taught dance for more than 50 years. She takes charge of most performances for the opening ceremonies of international sporting events hosted by South Korea.

“All the programs were excellent,” she said, still feeling the effects of the magnificent show. “Whenever one piece finished, I thought: ‘Why it is so fast! I really want to see more!’

Recollecting the performance, she said: “The costumes, dance, choreography, and techniques were flawless. And the way they created the backdrop was really magical.”

A Shen Yun dance piece combines brightly-colored handmade costumes, intricate choreography, and the professional skill of world-class dancers. Accompanying the dancers is a unique live orchestra featuring both Eastern and Western instruments. And the digital-backdrop extends the stage and transports the audience to heaven and to the worlds pf history and legends.

“Those Classical Chinese dances, ethnic dances, and dance dramas touched me deeply,” she said. “The dance movements and costumes were dazzling. The dancers’ techniques were really outstanding.” She admired the artists’ rigorous training to achieve such a superb level in performing arts.

She especially loved the piece, “Fairies of the Sea,” saying it is both graceful and sprightly; the rippling waves created by the long silk fans during the dance matched perfectly with the dancers’ costumes.

She said she learned while appreciating the performance. “The dances of the female dancers were splendid. I tried to learn their movements one by one from my seat. Sometimes I even imitated their hand gestures unknowingly,” she said, making arm postures of dance as she spoke.

“The choreography for the male dancers was really unique. They looked agile in the dances. You could feel their strength. Energy seemed to be transmitted unceasingly from their dance movements.”

Professor Zheng praised Shen Yun’s accomplishment of having four companies simultaneously tour the world in just 10 years. “I have been a big fan since Shen Yun toured to South Korea the first time,” she said.

“I believe appreciating dance performances can cultivate one’s disposition whether they are dancers or not. So I always recommend Shen Yun to people around me,” she said in the end.

“My children live in Seoul. I told them to make sure to go see Shen Yun.”

The KBS Theater in Seoul canceled Shen Yun’s four performances scheduled to perform last weekend due to threats from Beijing.