Dance Instructor Swept up by the Elegance of Shen Yun 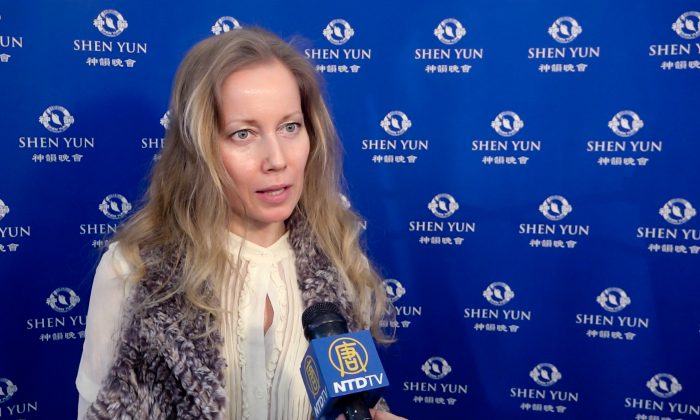 FAIRFAX, Va.—It was the first time Migle Gineityte had seen classical Chinese dance, but the ballroom dance instructor who grew up with ballet soon picked up on the language of this particular dance form, recognizing the meaning in repeated movements, and the personality behind the steps.

“It was interesting to see certain walking elements, certain arm elements, and the way they have some turns … it’s like when you see a person walking, you can recognize them from the gait,” Gineityte said.

“We loved it. Our daughter was looking forward to it, an entire month [since we got the tickets],” Gineityte said. “I especially enjoyed finally seeing a big performance with a live orchestra, live full orchestra, and especially really enjoying the music as well. And of course—the colors and all the choreography, everything that was put together, the elegance of it.”

Passed down through the dynasties, classical Chinese dance embodies the aesthetic values of traditional Chinese culture, with a system of distinctly Chinese movements.

It also includes systematic training in aerial and tumbling techniques—difficult jumps, leaps, and flips from which sports like gymnastics and acrobatics originated—but is deeply expressive as well. Classical Chinese dance emphasizes the bearing, or inner spirit, sometimes described as the feeling behind a movement.

“I could sort of get a feel of certain moves that I could see repeat, and had very interesting, kind of light and flowy movement,” Gineityte said. “I especially enjoyed a couple steps where the ladies would walk with their heel, but they would look so light as they’re doing the movement—just little details. I’m a dance nerd so I pick up on the little funny stuff that maybe other people wouldn’t pay attention to.”

In the 20-some vignettes of the program, several are story-based dances (there are also ethnic and folk dances from the various regions and peoples of China, and bel canto soloists). With these, Shen Yun brings to life ancient myths and legends, historical events, and even present day stories based on true events.

“I enjoyed the storytelling, and I enjoyed actually the humor. Humor is not easy to depict in dancing,” Gineityte said.

“I know how difficult that is, trust me. I know how much work they do, and to imagine the choreography, precision that they had … I’ve been through a little bit of that so I understand,” Gineityte said.