Dance Instructor Says Shen Yun Appeals to All the Senses 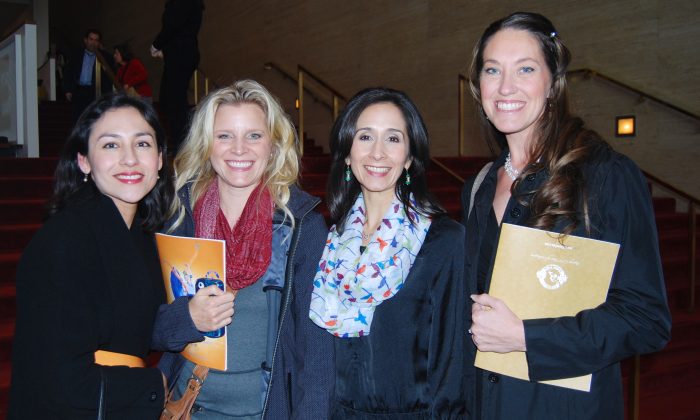 HOUSTON—”The precision of the movement is so captivating, it just draws you in,” said dance instructor Tiffany Nirider after seeing classical Chinese dance performed by Shen Yun Performing Arts at the Jones Hall for the Performing Arts in Houston, Dec. 26.

Ms. Nirider has danced professionally since 1997 and taught in several university settings. She said that she has studied all genres, and that she sensed the common thread between classical Chinese dance and many other dance and art forms.

“Rich—that’s the one word that comes to mind,” she said.

Ms. Nirider attended the Thursday afternoon performance with her friends, Shannon Erickson, Natalie Skrehot, a counselor, Claudia Lenz, a music teacher, who all enjoyed the performance as well.

The New York-based Shen Yun was established in 2006 to revive 5,000 years of the divinely inspired traditional culture through music and dance. In addition to classical Chinese dance, which has been passed down and refined for thousands of years, Shen Yun’s dancers perform ethnic and folk dances from many of China’s fifty-plus ethnic minority groups.

“It was just all-encompassing, very impressive,” said Ms. Erickson, who added that she wanted to bring her children to the performance as well. “I thought it was beautifully done.”

“It was very stimulating,” Ms. Nirider added. “It was visually beautiful, it just appealed to all the senses through the music and through the costuming … and I loved that everything had a storyline.”

Through classical Chinese dance, brilliant costumes, an animated backdrop, and a unique orchestra combining East and West, Shen Yun tells stories from the dawn of Chinese civilization to the present day.

Ms. Skrehot said the performance was moving, and that the traditional Chinese values she saw in the performance resonated with her. She said there was much to be learned from those values, and that she saw “kindness and loving, and being compassionate to one another” as well.

“You can see it in their faces,” Ms. Lenz added. “The passion that comes from [the performers] is very inspiring.”

Ms. Lenz also said the performance was eye-opening for her as the art and history came together to tell a story.

“It brought tears to my eyes,” she said. “Everything put together was just absolutely beautiful.”