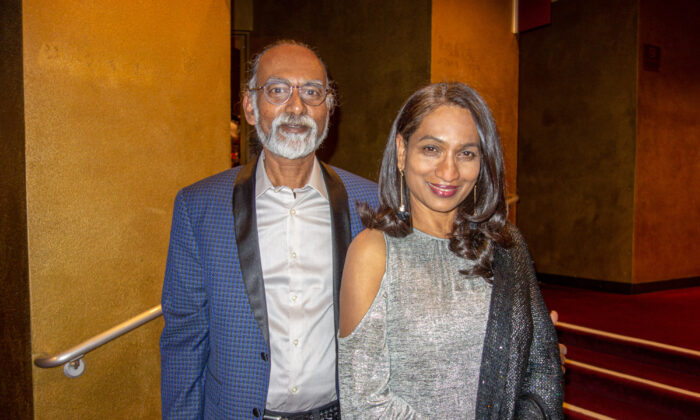 Sundara Swaminathan (R) and her companion attended Shen Yun for the first time at the San Jose Center for the Performing Arts in San Jose, Calif., on Dec. 28, 2019. (Mark Cao/The Epoch Times)

SAN JOSE, Calif.—Sundara Swaminathan, founder and owner of a dance school in San Jose, was excited to have the opportunity to see Shen Yun Performing Arts for the first time.

She enjoyed the world-renowned classical Chinese dance production on Dec. 28, 2019, at the San Jose Center for the Performing Arts.

“I think I’m going to go and tell all my dancers, my company dancers, to come and watch this.  They should see it, how well synchronized and how much of practice they do,” she said.

“[The Shen Yun] dancers are good. All of them are beautiful. Oh, they’re so well coordinated; the choreography is so good,” she said. “Lots of energy, all of them, all the dancers. … The synchronizing is so good.”

Shen Yun is a New York-based company that aims to revive 5,000 years of ancient Chinese culture through dance and music. Its dancers perform in top venues around the world, accompanied by a unique live orchestra that combines Chinese and Western musical traditions.

Swaminathan found the music to be “so breathtaking.” She admired how well synchronized the dancers and the music were.

“I love everything, everything,” she said. “Very well produced. The artistic direction is so good. … It’s outstanding.”

She described the performance as a “must-see.”

After Swaminathan found out that Shen Yun creates an entirely new production each year, she said, “Then we should come every year.”

“It was spectacular,” he said. “The color, the movement, and the choreography, and the synchronicity, how they all dance together, was very moving.”

Shen Yun dancers wear brightly colored costumes inspired by traditional Chinese clothing. They often use colorful props such as fans or flowing silk sleeves, which become part of the choreography.

“[The colors] brought it to life,” O’Shea said. “We sat above, in the balcony, so you can see from a downward view, and it was actually really nice. … The formation and how they all move together in tandem.”

According to Shen Yun’s website, China’s authentic traditional culture has been nearly lost under today’s communist rule. Shen Yun’s mission is to bring this ancient heritage back to life.

O’Shea feels this mission is “a hundred percent and right on the money.”

“I think it’s doing excellent, to bring that culture to here, where I think it’s needed,” he said. “I was very happy that we came, and it’s been eye-opening and wonderful.”

With reporting by Mark Cao, NTD Television, and Sally Appert.