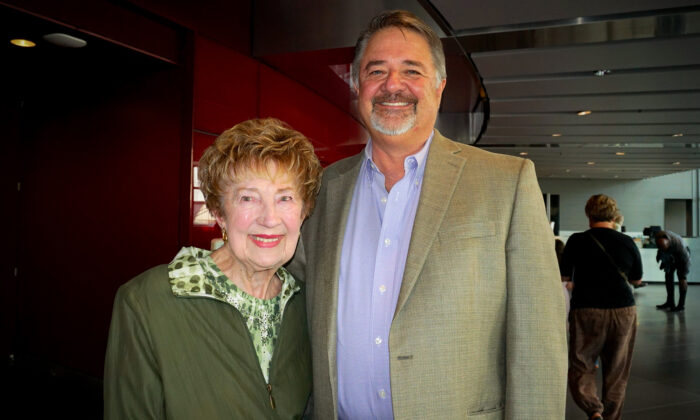 DALLAS—Kevin Clutterbuck, director of finance for Spark Power Corp., and his mother Sharon treasured the experience of watching Shen Yun Performing Arts at the Winspear Opera House in Dallas, Texas, on April 16.

“Breathtaking, … this is breathtaking!” said Mrs. Clutterbuck, after attending the performance. “I have treasured Chinese culture for decades and to see this in person, … I’m blessed!”

“It’s the first time I’m here. … This is a birthday gift from my son,” she said.

Kevin was equally amazed at the beauty of Shen Yun.

“The colors, the dance, the stories, the history, it was wonderful!” he said. “We’ve been seeing the advertisements for years and been wanting to come for years, and I’m so glad we finally made it.”

Based in New York, Shen Yun is the world’s premier classical Chinese dance company. Along with folk dances and solo performances, the production uses dance to tell tales from ancient Chinese culture up to the modern-day.

Shen Yun also utilizes a patented, digital backdrop that allows for seamless interaction between the dancers on stage and the background scenery.

“The CGI and being able to sit there and see the heavens coming to Earth, back and forth—quite honestly, that was the highlight for me,” Kevin said.

“The dancers are amazing, … just phenomenal athletes. I have so much respect for them, … their dedication and their training to dance like that.”

Along with myths and legends, Shen Yun presents scenes of the present-day life of Falun Dafa practitioners, who live by moral teachings based on the principles of truthfulness, compassion, and forbearance. The group has been persecuted in China since 1999.

Mr. Walters and Ms. Allen both agreed that the scene about the persecution was the most touching.

“It’s interesting that with the beauty of the dance, they’re still bringing out the facts,” Mr. Walters said.