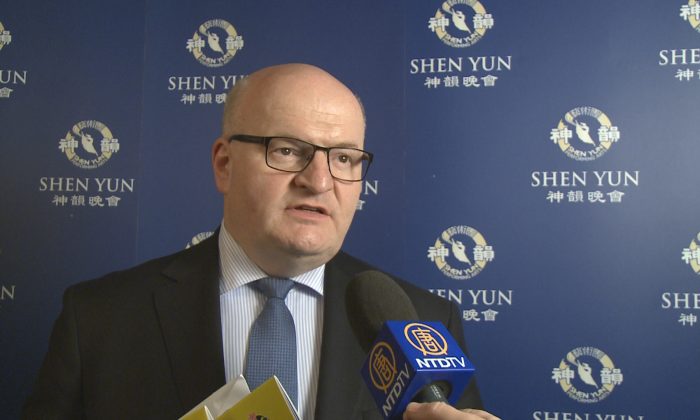 BRNO, Czech Republic—Daniel Herman, the minister of culture in the Czech Republic, has seen Shen Yun Performing Arts several times. This year, he remarked that it is particularly fitting that Shen Yun was in Brno on the Easter weekend.

“I think it’s very appropriate [that Shen Yun is here] now at the Christian Easter. [Shen Yun] is like a confluence of positive energy and good hope in people, and that is what it’s all about,” Mr. Herman, who has been ordained as a priest, said after watching Shen Yun.

“It is a massive power that can embrace the world, and I think it’s a positive barrier against evil, violence, lies, falsehood, and that is the way.”

New York-based Shen Yun was formed in 2006 by a group of leading classical Chinese artists who aimed to revive China’s divinely inspired culture, a culture that has been nearly destroyed after decades of rule by the Chinese Communist Party.

It is a massive power that can embrace the world, and I think it’s a positive barrier against evil, violence, lies, falsehood, and that is the way.
— Daniel Herman, minister of culture, Czech Republic

The classical Chinese dance presented by Shen Yun is an ancient art form perfected over millennia, as it was passed down from dynasty to dynasty. Shen Yun’s performances feature this ancient art form, as well as ethnic and folk dances from different parts of China, which are made all the more beautiful by hundreds of colorful handmade costumes, an animated digital backdrop, and a live orchestra that combines traditional Chinese instruments with classical Western instruments.

Beyond the aesthetic beauty in the dances, many audience members note the deep inner meaning in Shen Yun’s performances, which are rich with traditional Chinese values such as benevolence and justice, propriety and wisdom, respect for the heavens, and divine retribution.

According to Shen Yun’s website, these ideals are the essence of the traditional Chinese culture, and originate from Confucianism, Buddhism, and Taoism.

“I’ve been thrilled by Shen Yun in Brno this year. It’s a beautiful show presenting both the superb art of the profound Chinese culture, as well as the spiritual aspect, and it provides hope, most important of all,” Mr. Herman said.

“I would like to highlight that in the moments of the certain dark background of today’s world, there’s a big message of hope in this—hope for people who perhaps at this very moment are suffering in the Chinese communist prisons for their belief.”

Mr. Herman said it is the responsibility of the people living in the free world to not forget about people suffering in communist China, and to assure them “with our solidarity, our closeness.”

He also expressed his pleasure that through Shen Yun, the message of “tolerance, compassion, and love” can be spread to thousands of people in Europe.

“It is indeed the touch of the divine. I think it is important to raise our heads toward the values from which this message and art come from. I say it again: there is a big hope in this and it cannot die.”