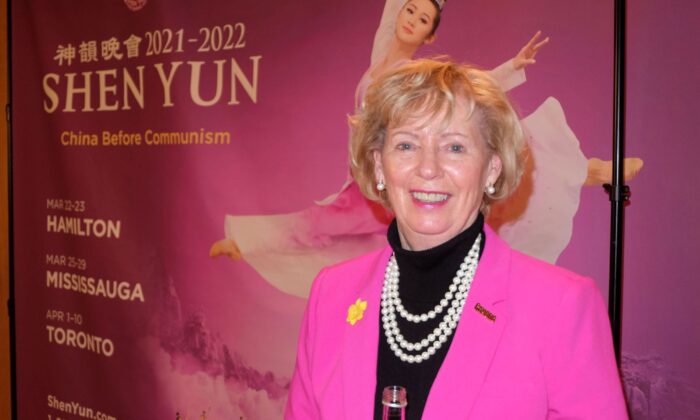 “It’s been a very difficult two years for everyone, no matter where you live in the world, and it’s very uplifting to see the dance and the light and the airiness that they perform. I think it lifts everybody’s spirits to have come tonight,” Ms. Sgro said after seeing Shen Yun at the Four Seasons Centre on April 1.

“It was beautiful. It’s absolutely breathtaking with the dancers—the talent and the colors that all come together. It’s just really breathtaking. I would really like to do more to ensure that the rest of the world actually gets to see this beautiful performance.”

Shen Yun is based in New York, where it enjoys artistic freedom, allowing it to create performances of authentic classical Chinese dance and music and present them to audiences worldwide. The company says its aim is to revive the traditional culture of China, with 5,000 years of history and deeply spiritual roots, but which has been all but destroyed under decades of communist rule.

Ms. Sgro, who is co-chair of the Parliamentary Friends of Falun Gong, said she was particularly struck by the dance pieces depicting the persecution of the Chinese spiritual practice, also called Falun Dafa, in today’s China.

“It was a very moving experience to see exactly how that’s continuing,” she said.

Through Shen Yun, Ms. Sgro said she gained a new appreciation of traditional Chinese culture and its richness, noting the “very positive impact” she sees in Shen Yun.

“Maybe the tour that Shen Yun is doing will help promote peace and harmony in other areas of the world that we’re currently living in,” she said.

Ms. Sgro added that she’ll be telling others to come and see the show.

It will “give them an evening of dance, beautiful colors, beautiful costumes, beautiful people, [and they’ll] leave here after the performance in a much more lightened feeling and enlightenment of spirits and knowledge.”

The former MP said Shen Yun is an “absolutely astounding” performance, one that’s not just entertainment, but also educational.

“Not only are we seeing wonderful dancing …, but we are being confronted with so many of the different traditions of China as it used to be,” she said. “We’ve seen dancing … from all the different parts of China. … We know that China is made up of so many different ethnic groups, and so it’s wonderful to be shown all of those different groups and their own traditions.”

“To be introduced to all of that is really a history lesson for those of us who have never seen it in our own lives,” she said.

Former Conservative MP Wladyslaw Lizon, who has been to Shen Yun performances in the past, commended the company and its performers.

“The skills, the whole show put together—it’s amazing,” he said, adding that “the dancers are extremely skilled.”

Mr. Lizon also noted the historical storylines in the dances as well as the dance pieces that depict the ongoing persecution of Falun Gong by the communist regime.

“The [persecution of] Falun Gong is truly something that … coming from a communist country [Poland] where I grew up, I can really connect to,” he said.

“They perform here in Toronto, Mississauga, and Hamilton. We should all thank them for their great dedication and work.”

“It’s such an amazing show, such great energy,” Ms. Carson said. “I think it takes more than just physical energy. It takes emotional energy and a commitment to the dance and the choreography, and having everything together. And that’s mind, spirit, and life.”

She hopes everyone will come and see Shen Yun, Ms. Carson added.

“The energy of the show—nothing can replicate that. I would encourage everyone to see the show and to learn,” she said.

“The dancing, the choreography, and the effort on all of the dancers is outstanding and breathtaking.”

Laurie Bauld, a ballet dancer of many years and a jewelry designer, said Shen Yun is “very inspiring.”

As a dancer herself, Ms. Bauld said she was impressed by the choreography and the movement in the story-based dances, as well as the costumes and all the colors.

“It was just absolutely stunning, all of it,” she said. “I’d definitely come back tomorrow if I didn’t have to be somewhere else. That’s how much I enjoyed it.”

“It’s lovely, it’s fantastic. I really enjoyed it,” he said. “The ending was spectacular.”

Reporting by NTD and Teng Dongyu.