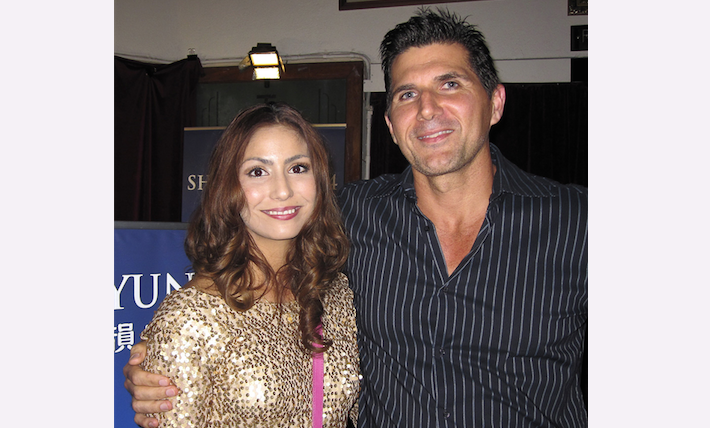 ‘It really blew me away’
BY Epoch Times Staff TIMEMay 7, 2014 PRINT

PERTH, Australia—Paul Ventouras came to see Shen Yun Performing Arts at The Regal Theatre, on May 3, because his friend and work colleague who had seen it on opening night told him it was a ‘must see’.

“I feel very, very privileged for us to experience the cultural experience like that tonight, I really do. It’s amazing, it really blew me away.”

“The backdrops are as grand as they are intricate. So remarkably true to life, they allow you to forget where you are, and journey to another place and time.”

As a professional involved in video production and screen projection Mr. Ventouras was enthralled by what he experienced and wished he had better seats.

“The backdrop was amazing, … the way the performers just new when they were dropped down the backdrop, the way they would come up on the screen , it was just seamless, there was not like one second delay. It was just very hard, I admire and respect the dedication the performers, … to make that come together, for the audience,” he said.

He said it gave him a lot of inspiration and ideas for future films and productions.
The synchronicity of the performance, and how he was totally immersed in the performance had a profound effect on Mr. Ventouras.

“I was immersed in the experience. It wasn’t like that I was standing back and seeing different actual elements on the stage, the synergy of it all coming together. I was immersed. I actually didn’t feel like I was actually in the theatre, I felt like I was actually involved. I suppose the interaction that I was having with the performers and the screen, it really sort of captivated me,” he said.

He explained that for him Shen Yun was more than a theatre performance, more than a physical experience but a complete spiritual experience, a soul stirring experience. He felt a connection with Shen Yun.

“The collective consciousness of human beings, we are all thinking the same way … I think in the intro with all the planets , in the universe and all that , a great way to actually open up the whole Shen Yun experience. Because you start to realise that you’re not just one person living your life, we are all part of humanity.”

“There was really a lot of fascinating aspects of tonight’s show … so feel very privileged to have experienced it tonight.”

He said he really admired the dedication of the performers and the synchronisation was amazing.