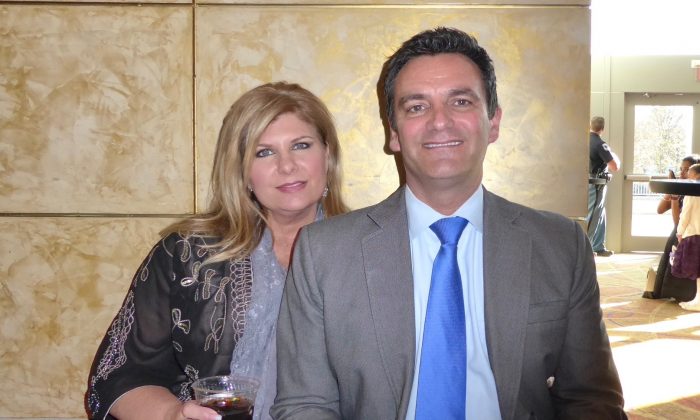 Mr. Wilde said they, “Oh, just love the pageantry, the costumes, and the dance. I mean, it’s great. We’ve not seen anything like this before.” He enjoyed “the dramatic colors of the costumes, the flowing costumes, and just how they make the costumes move, with the wind and the flags.”

It was the couple’s first experience of Shen Yun. According to Shen Yun’s website, “Sophisticated dance techniques, an orchestra joining instruments from both the East and West, beautiful costumes, and a stunning back drop—this is Shen Yun at first glance. But digging deeper, one discovers a sea of traditional Chinese culture. Mortals and divine beings merge on stage as one.”

The company intends to share the gift of China’s divinely bestowed culture with the world.

Mrs. Wilde said she felt the heavenly side of Chinese culture. “Oh yes. It comes through. The supernatural powers, divine, beauty, it all comes from the music and the dance.”

Her husband said, “Yes, I would agree. How it’s all presented, and it’s truly felt inside for each of them.”

He was touched by Shen Yun’s portrayal of current attempts to suppress traditional Chinese spiritual beliefs. Mr. Wilde, a health administrator, seemed to feel empathy for Shen Yun’s mission to revive Chinese civilization. He said, “Well, the oppression that’s going on, and how the dancers in that skit were fighting against it. That’s really going on right now. We don’t get that here, and that it’s really a reality in the world right now.”

He seemed to think that it’s tragic for Chinese traditional culture to be suppressed inside China.

“Just the fact that—how sad, a culture can be pushed out of its own land. That’s very, very, sad,” said Mr. Wilde.

“Audience members are often surprised to hear that Shen Yun cannot be seen in China today,” according to the Shen Yun website. “In fact, there is no other performance like it in China today. “Why can’t a Chinese cultural show be seen in its homeland?”

Shen Yun’s goal is to revive the authentic and original manifestation of traditional Chinese culture and art … This is why the Communist Party fears Shen Yun, and why this kind of performance cannot be seen in China today,” according to the Shen Yun website.