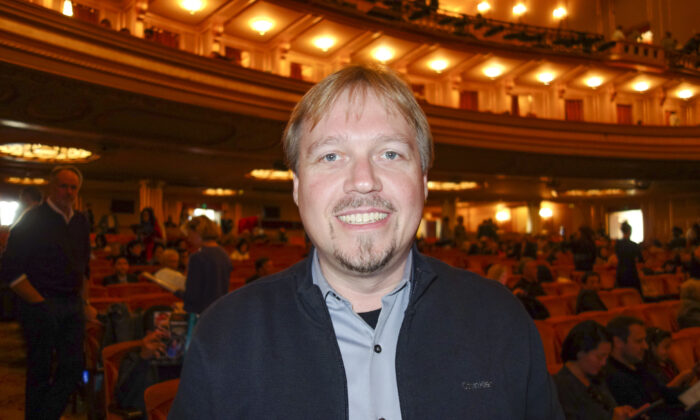 SAN FRANCISCO—Entrepreneur Norbert Niederhauser, his wife Mayumi Acosta, and their niece from Colombia attended Shen Yun Performing Arts on New Year’s Eve as a near last-minute decision, as Acosta had wanted to see the acclaimed dance company for over ten years.

“I feel like this is the perfect day,” said Niederhauser, who grew up in Austria and frequented the opera. The jet-setting couple enjoys going out and travel, so they were thrilled that they grasped their chance to see Shen Yun at the War Memorial Opera House when they finally had the time.

Though more familiar with classical ballet and opera, Niederhauser enjoyed the 5,000 years of Chinese civilization told through classical Chinese dance that he saw on stage.

Niederhauser laughed and said that though he had waited many years before finally seeing Shen Yun, others shouldn’t.

“You don’t have to wait! Put it in your calendar and make it happen,” he said.

“You are immersed in a story, in different stories, different story parts to experience parts of China, shown through choreography,’ Niederhauser said.

Acosta was deeply moved by experiencing the ancient culture, which is said to be divinely inspired, a land where heaven, earth, and humankind coexisted in harmony.

“Sometimes I felt like I wanted to cry, it was so beautiful,” Acosta said.

Acosta is a photographer and attuned to details and beauty, which she saw much of in the performance.

“I’m really impressed with everything, the choreography, the way they tell the story,” she said. “The dancers are magnificent; they’re all synchronized, and it’s just beautiful to see the costumes and everything, I just love it.”

“It’s just perfection, I have never seen anything like that,” Acosta said, marveling at the perfection and precision of even the smallest gestures. “It’s just fantastic to see.

“The expressions, the beautiful movements, the softness and the speed, just beautiful, I love it,” she said.

Acosta loved that Shen Yun was bringing a piece of the authentic Chinese culture and sharing it with the world through art and story.

“It’s quite impressive,” she said.

With reporting by Lily Yu.