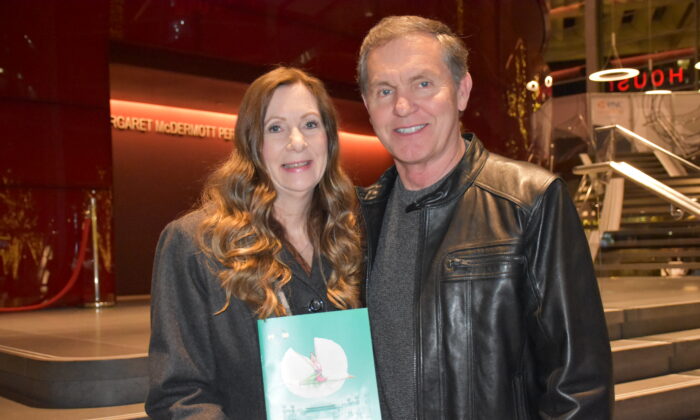 DALLAS—Donna and Greg Carey watched as two Shen Yun seasons slipped by them before they decided to jump on the opportunity to buy tickets early this year.

Donna, a nurse and former director of a hospital, said they purchased tonight’s tickets two months ago. “For the past two years [we] caught [its advertising] at the tail end and thought ‘Oh no, it’s over,’ ‘Oh no, it’s leaving.’ But this year we planned well ahead so made it a part of our Christmas.”

They said the messages they saw in the show fit perfectly into the season devoted to the presence of a savior on earth.

“When you go to the theater, you don’t often get any type of spirituality and this show was much more spiritual than what I thought it would be, which was great for us because we understand it. Just think of all the people that are being touched and reached that don’t have a concept of a higher being or a God or any kind of spiritual connection. They just go through their daily lives, so for them to be sitting here, I’m sure a lot of people are very surprised, I think that’s a good thing,” Donna said.

The Careys are Evangelical Christians. Shen Yun performers also follow a spiritual discipline that, like their forefathers for many generations, acknowledges a divine Creator. This traditional Chinese belief in heaven is depicted on stage by Shen Yun Performing Arts, in addition to folk and ethnic dances, and stories of modern-day China.

“It was very elegant, just elegant, and beautiful and very spiritual. It really spoke to me. I didn’t think I would necessarily understand what was going on but it kind of touched me in my spirit where I think everyone can be touched by something like this,” Donna said.

It was just such a wonderful performance. It’s like nothing we’ve ever experienced before and we’ve been to a lot of theater.
— Donna Carey

“It was just such a wonderful performance. It’s like nothing we’ve ever experienced before and we’ve been to a lot of theater. But [Shen Yun] was just amazing. We were so looking forward to coming and it met all of our expectations. We just can’t wait to come again next year. It was great,” Donna said.

“We thought it was fabulous. Our culture has been improved. We’re not accustomed to this. Being our first, I think we were quite amazed that the performance was so synchronized and so beautiful. And colors, and the rhythms and the music. I think the music was one of the most important parts and it blended in beautifully. A quite fabulous experience. I enjoyed it,” he said.

Shen Yun’s name translates to “the beauty of divine beings dancing.” This is a theme the Careys felt manifested on stage before their eyes.

Greg went further and described the commonalities of their beliefs with what they saw in Shen Yun.

“We see how culture and the Savior depicted in some ways kind of represented in some ways Jesus, I thought. So [Donna and I] kind of identified with that, though we don’t agree with everything or every aspect of that. We still feel it was touching and represented a very heartfelt love that our Creator has for us and the beauty of what He has made around us, wanting to have a relationship to in some ways, and loving and caring. All those things were very important to us and we’re glad that that was in there. I think it’s a very important part of [Shen Yun]. That it’s all of ours, from birth, to death, and even beyond,” he said.

The couple’s recognition of common values continued when they saw in the performance that followers of the spiritual practice Falun Dafa are persecuted in China. Christians are among the largest populations of persecuted people in the world. Shen Yun performers practice Falun Dafa and cannot perform in China due to the state-led violence going on there.

“We did read a little bit about it before we came because we were like ‘What is this all about?’ And we did read about the oppression and that shouldn’t be true in any culture,” Donna said.

“You should have freedom of religion and be able to express your religion, whatever it is. And we as Christians, we sense that now even in America that we’re being persecuted, so for [Falun Dafa practitioners] to be persecuted in China and that you can’t have your religion, it just made me so thankful that this group of people, even though it’s very small, has come to America and they can express what they want to on the stage for people like us to see. That we didn’t know anything about it and now we do, it makes us feel closer to what’s happening … with China,” Donna said.

“We do have so much in common even though we’re so far apart and the cultures are so different. Deep down in our core, we all believe in a higher power and someone who’s here to be our salvation and take care of us and making our lives better. And that came through in this production, very much so,” she added.