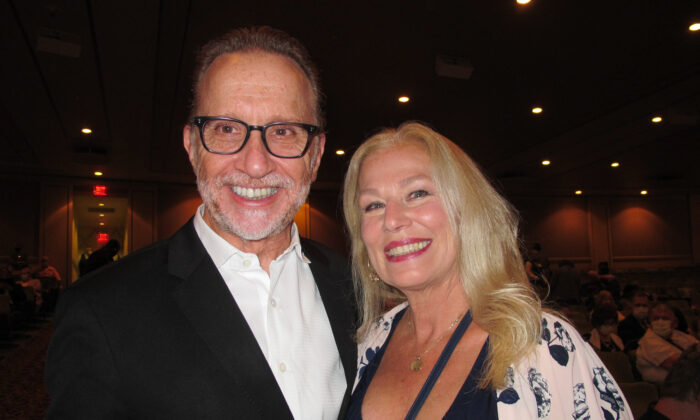 WORCESTER, Mass.—Shen Yun Performing Arts bestows an amazing experience on its audiences, and at The Hanover Theatre, the expectations of Janet Lizotte and Richard Pelland were fulfilled.

“It was magical,” said Lizotte, owner and director of Education Beauty Pros International. The couple was attending the Oct. 16 performance by the New York-based company.

“The colors, how the dancers are all in sync, perfectly synchronized … it’s just so beautiful,” she said.

Pelland, the executive director of Providence Place Inc., a non-profit organization, was also touched by the beauty of Shen Yun.

“The choreography is just exquisite, really … it’s right on point. And even though they make it seem kind of seamless and easy, it has to be very difficult …  to do that [together] in such a wonderful way,” Pelland said.

Shen Yun‘s mission is to share with its audiences “China before communism.” After its seizure of power in 1949, the Chinese Communist Party (CCP) began destroying China’s 5,000-year-old culture, including its spiritual traditions. Even today, Shen Yun Performing Arts cannot perform in mainland China.

Pelland said of Shen Yun’s mission to showcase the Middle Kingdom’s traditional beliefs, “I think it helps to educate all of us and it gives us the opportunity to appreciate it.”

He said he was glad to know that traditional Chinese culture was finding its way back through the work of Shen Yun, despite opposition from the Chinese Communist Party (CCP).

Shen Yun’s dances also portray China’s spiritual values and beliefs, which are based on a long history of teachings from Taoism, Buddhism, and Confucianism.

Shen Yun’s message and spirituality resonated with the couple.

“That’s why we’re here. We feel that connection. We honor it and we applaud the values that are part of [China’s] tradition,” Pelland said.

He admired the dedication shown by the performers. “[T]hey should be most proud of their work,” he said.