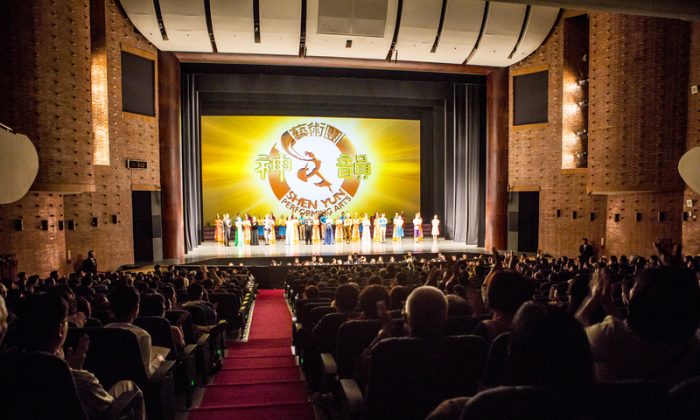 Among the audience members were Mr. Zeng Huidi and Mr. Lin Kuanghwa, Chairman and Deputy Chairman of Kanding Township Council in Pingtung County. They came all the way from Pingtung County to Chiayi City to attend the spectacular show.

He said, “I enjoyed the Manchurian-princess dance very much. Their costumes are very unique and very beautiful. The movements of the dance are full of traditional Chinese flavor. It’s not easy to dance so wonderfully while wearing the elated ‘flower-pot’ shoes.”

Impressed with the high-tech animated digital backdrops, the Township Council Chairman noted, “The program that impressed me the most is Ne Zha Churns the Sea. The story is very interesting, and the coordination of the dance and the backdrops is perfect. It reminded me of my childhood, as I often read legendary stories, such as the Prince Ne Zha. Shen Yun adapted the story and performed it on the stage. It’s very impressive. I feel very happy as well.”

Chairman Zeng was also in awe at Shen Yun’s programs portraying the spirit of steadfastness and righteousness. He said, “I was moved by The Steadfast Lotus very much. Though being persecuted, they were rescued by gods and ascended to heaven eventually due to their steadfastness.”

The “they” he mentioned referred to Falun Gong practitioners, who are currently being persecuted in China for maintaining their principles of truthfulness, compassion, and tolerance.

Speaking of Shen Yun’s touring the world to promote the authentic Chinese culture in every corner around the globe, he said that he liked the joyful atmosphere very much. “I’ve never seen such performance. It’s very unique.”

“I’ll recommend it to my friends,” the Chairman said.

After seeing Shen Yun, on March 19, Chiayi County Deputy Magistrate Lin Mei-chu exclaimed, “What performed today is not an ordinary art, but it’s something blended with culture and history. This is the best show I’ve ever seen. I can only describe it with the word of incredible.”

Fascinated by the superb classical Chinese dance illustrating ancient myths and historical legends, the Deputy Magistrate said, “It really touched me deeply. In fact, if we appreciate it carefully, we can find the dance in every program has very profound connotations of historic legends and cultural background. Therefore, I was deeply touched by every dance and vocal performance. It’s indeed a magnificent performance.”

“Actually, what impressed me first was the music. The synchronization of the rhythms of the music and dances was seamless.” “With the combination of Oriental and Western music instruments, the music played by (Shen Yun) orchestra was perfect. I feel it’s indeed exceptionally good.”

“In particular, in terms of the sound (of the music), it is really one of the best performing arts companies in the world.”

As to Shen Yun’s professional handmade costumes, Lin Mei-chu praised them saying, “The costumes are really fantastic. The vibrant colors, coupled with the bright staging, naturally made me feel very relaxed.”

Lin Mei-chu appreciated the talented artists saying “The performers’ skills are so wonderful that I feel they really touched the bottom of my heart. When dancers perform a movement, it will be accompanied by some touching music—the coordination between the dances and music is perfect.”

She added, “Every program is so wonderfully performed, and it can really touch our soul.”

Reporting by Irene and Bill Xu