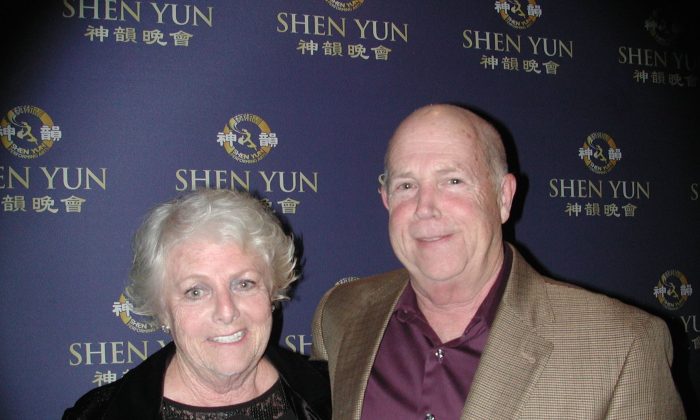 COSTA MESA Calif. — Shen Yun performed to six consecutive full houses in Costa Mesa’s Segerstrom Center for the Arts from Jan. 29 to Feb. 1. Breathtaking and colorful, the performances were greeted with standing ovations, clapping and cheer.

“Beautiful,” “Gorgeous,” “Wonderful,” “Phenomenal,” were some words that escaped Jan Pardonnet after the performance. She attended Shen Yun on the opening night with her husband.

“It was not what I thought it was going to be. In a very good way I was surprised. [Shen Yun] told stories and I didn’t expect that,” she said. “I loved it! I loved it very much.”

New York-based Shen Yun is an independent, non-profit performing arts company. Through the universal language of dance and music, Shen Yun brings stories and legends to life, celebrating the riches of Chinese culture with millions around the world.

Retired aerospace business manager Don Gerner felt Shen Yun “shows the China that I always thought of since I was a kid, not the China that you see in the news today.”

His wife, Irene Gerner, concurs. “The China that we used to read when we were children. The stories of the warriors and the conquering of the different things. The tribulations and trials they had to go through, and how the people ended up winning.”

According to Shen Yun’s program book, “Shen Yun’s production draws its inspiration from China’s 5,000 years of civilization. Values such as compassion and loyalty, kindness and bravery lie at the heart of traditional Chinese culture. We believe this heritage is a precious gift worth keeping, and worth sharing with all of you.”

The couple said they would absolutely recommend other people to come see Shen Yun.

“A must see. You have to come see it to understand it and to see the beauty and hear the stories. I think each one takes something different from it,” said Mrs. Gerner.

Robin Repp is a photographer and art teacher. With more than 35 years of exploring various photography methods, her current works employ digital infrared photography to document landscapes, exploring themes of anticipation, and the unknown. She was most impressed with the interactivity of Shen Yun’s digital animated backdrops.

“You really get sucked into the visual part of it,” she said.

Shen Yun’s digital animated backdrops are remarkably intricate and true-to-life, allowing the audience to suspend reality to journey to another place and time. The stage and backdrop become one, and characters are free to move about wherever they please.

“I didn’t realize [they] would have that fun animation in the background. I felt the movement. I was following the little character going off into the landscape or coming back in and you really feel it, that was one of the best parts, I think. That was a surprise,” she added.

Ms. Repp says the visual aspects were one thing, but there was so much more to it.

“It’s a wonderful combination of music and dance and fantasy and animation and art and the stories and the spiritual part, it’s such a combination,” she said.

“I thought it was just going to be a visual experience, and it was just that little bit of magical underpinning sort of touching you on another level that you weren’t expecting. I think there is a spiritual undertone, a little moral in the story, a little fable—that spiritual touch,” she added.

Her daughter, Brooke Barnes, a model and actress, described an overall feeling of “beauty and awe” and was moved to tears by what she saw.

“It was amazing, visually stimulating for sure. Definitely very different from anything that I’ve seen. I enjoyed it,” she said.

She was touched by how Shen Yun portrayed Chinese culture. “I think it’s beautiful the way that they portrayed it. Definitely touching, it made me cry at one point, it was so beautiful,” she said.

Ms. Barnes was particularly touched by the dance Sleeves of Grace, which featured gentle maidens gliding on a lotus pond, creating ethereal patterns in the air with their silken sleeves.

This reflects a style of classical Chinese dance widely known as a “water sleeves dance,” because the sleeves flow around the dancers like water. It has a history longer than that of Western ballet.

The Shen Yun website explains: “Intrinsic to classical Chinese dance are the concepts of bearing and form—the beautiful dance movements bring out an inner meaning. For Shen Yun dancers, inner beauty and grace are cultivated along with the outer qualities.”

Formed in 2006, Shen Yun has grown rapidly to four companies, each featuring some 100 performers. As a part of its 2015 world tour, the four companies will visit more than 100 cities in five continents.