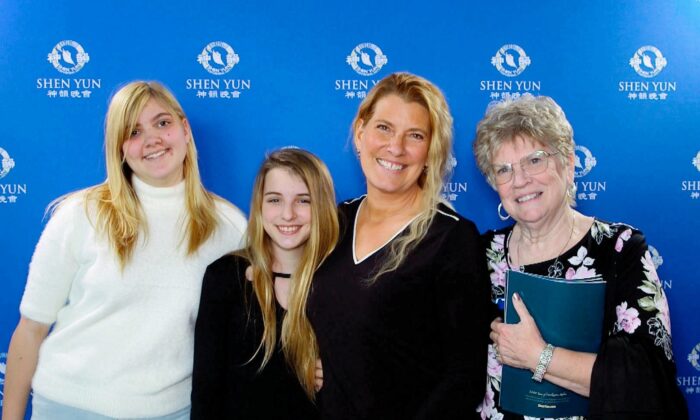 LAS VEGAS—For Leeza Bock, an executive at a major cloud company, Shen Yun Performing Arts was more than a great time with her two daughters and her mother. It was a celebration of the spirit and an affirmation of what kind of world she’d like to leave in her daughters’ hands.

“I just absolutely thought that [Shen Yun] was absolutely beautiful,” Bock began. “It’s important for us to know a little bit about the Chinese culture and also just to enjoy the beauty and synchronicity of everything.”

The Bock family took in New York-based Shen Yun at The Smith Center for the Performing Arts in Las Vegas, Nevada, on March 1, 2020.

Shen Yun is the world’s premier classical Chinese dance company and is spearheading the revival of China’s traditional and deeply spiritual culture.

Bock thought the dances that evening, including storytelling dances and ethnic and folk dances, were “absolutely breathtaking.” “I mean, just emotional, without words. And truly, my daughters kept telling me, ‘Oh, Mom, it looks like this flower or it reminds me of that flower.’ And just the movements and the flow are just so incredible”

“And I loved the message,” she continued. “I really did love the message of … we all are students of beauty, and flow, and the synchronicity, and life in general, but also of how we all become more one. There’s no one person that stands out. We’re all looking to be part of the greater whole. For me, it was the message I got. It was beautiful.”

Fork in the Road

China was once known as “The Divine Land” and has always acknowledged the presence of a divine Creator. Bock felt this authentic aspect of China’s traditions came through in Shen Yun.

“I think absolutely [it did]. In the last few dances, you get a sense of how divinity is important and it may not always be accepted. … There is something of that in all of us that brings us together if we allow it to, if we can really, can focus on that and let that become part of who we are and how we live our lives daily. It’s a truly beautiful thing.”

“I think, in the world we live today, there is so much animosity and so many politics and so many things that trap us into some sort of individual place that we think we have to live. But the truth is, we all can rise above that. We all can be part of a greater whole that lives in peace and has a greater purpose,” she said.

“I think [that purpose is] peace and love and support. And encouragement and understanding are some of the greatest values. And I hope that I’m instilling this in my daughters by bringing them here [to Shen Yun]. … The world is becoming something right now that we have sort of a unique fork in the road to choose which direction it’s gonna go, right? It’s either gonna be something that’s good or something that is, I’m gonna feel very sad leaving my daughters with,” Bock added.

‘You could feel it in your chest and your heart’

Bock said she would describe Shen Yun as “breathtaking, breathtaking.”

“For anyone that is not sure if they want to see it or if they wanted to make the time or if they wanted to spend the money, I’ll just tell you that for me, it was absolutely a must-see on my bucket list, and something that I think I was really, really proud to have brought my daughters to. And my Mom—combining the generations.”

Among Shen Yun’s roughly 20 vignettes are songs sung by specially-trained bel canto vocalists. Shen Yun has brought back the once-lost art form of true bel canto singing, and is sharing it with the world.

It was really beautiful—it was more than a voice. It really was a vibrato that gave sound waves into the room.
— Leeza Bock

Bock’s daughters are singers, and she herself has experience at concerts that gave her insight into what it was like to hear the bel canto soprano.

“The incredible vibrato that she had,” Bock said. “Just the vibrato, and you just can feel like she had her own resonance that came off of it. It was really beautiful—it was more than a voice. It really was a vibrato that gave sound waves into the room. She’s really got an amazing voice.”

“I go to concerts a lot. And often you have the bass that sort of makes you feel the music and your heart sort of synchronizes with the bass of the music rather than all the other instruments. Her voice was so incredible, you could really feel the vibrato act like the bass. You could feel it in your chest and your heart try to synchronize with it,” Bock said.

As for the deeply spiritual lyrics, the soprano sang, “I think it’s, again, you don’t always have to understand the words to understand the message,” said Bock. “It was really truly beautiful. I think that [the lyrics] were unique and I understand probably why they’re not always the most accepted in China. It’s probably a little more Western thinking but absolutely beautiful and it gave a lot of meaning to probably, the couple of songs that were after that, too.”

Shen Yun’s song lyrics, like the storytelling dances, include themes of divinity and faith, and describe the Creator returning to earth for all mankind.

“As a Christian, I truly believe that that is how things are,” Bock said. “And it’s beautiful to see that across multiple cultures. You know, I think that you don’t always hear the same message resound across different cultures, different languages, different areas of the world and it’s especially emotional when you do.”