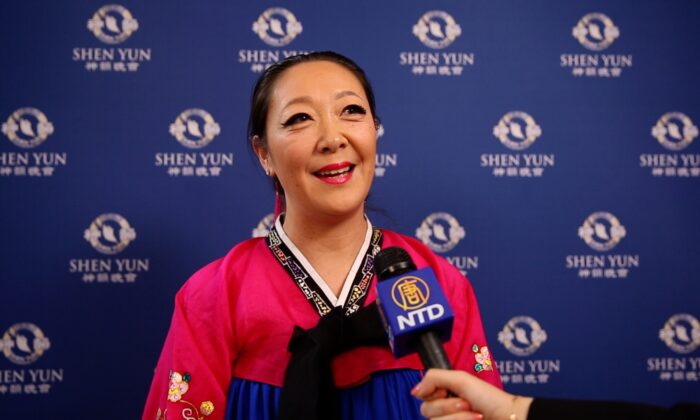 AMSTERDAM, Holland—Sandra van Luijtelaar is the conductor of three orchestras, and for that reason, she felt she must see world-renowned Shen Yun Performing Arts during its stop in The Netherlands, and attended a performance by the New York-based company opening night on Feb. 1, 2020.

Van Luijtelaar was delighted to find the performance accompanied by a live orchestra that really “adds something to it.”

“Nice refined music and also a good balance with the wind instruments, strings, and of course the presence of authentic Chinese instruments,” she said at the RAI Theater. She was very happy to have made it because van Luijtelaar said the tickets had sold out quickly. All three performances in Amsterdam were sold out nearly a month before the performances.

“Overall wonderful, beautiful, lovely, graceful,” she said, adding that it was everything you would expect of traditional Chinese culture, and done to perfection.

Shen Yun tours the world every year with a new production of classical Chinese dance, original scores, and a new set of costumes and animations to help tell the stories of 5,000 years of Chinese civilization. As stated on its website, Shen Yun’s mission is to revive the authentic traditional Chinese culture and share it with the world through the universal languages of music and dance.

“The mission is good,” said van Luijtelaar, who adds that history and culture should be preserved, and the arts are a wonderful way to do so. Being Dutch and Korean, and a music conductor, van Luijtelaar noted the merits of art transcending cultural and language boundaries.

Van Luijtelaar praised the production and said she didn’t want to give too many spoilers about Shen Yun’s famously unique backdrop, but that “it gives you even a bigger smile when you watch the performance.”

For her, Shen Yun reached admirable heights in quality.

“Anything is possible in perfection,” she said. “When you like to strive to perfection, you can succeed if you have the right state of mind, and I think that is something I’ll take with me. If you want to do something perfectly, you have to dedicate time to it, but also the love, the passion.”

“I feel that is lacking with a lot of people, passion for something. My passion is music, so I live for music, so I approach it in that way. I hope a lot of people can take passion homes after this performance, that would be the most wonderful,” she said.

She also hoped the spirituality of the traditional culture the audience saw on stage that night would make us all take pause.

“We are just go, go, go, and there is not a moment for reflection and finding things within oneself,” she said. But in the performance, “you have gotten a taste of it.”

“They are here and that is good for you,” she said. “The performance is graceful, it lovely and performed in perfection which makes you go home with a smile.”