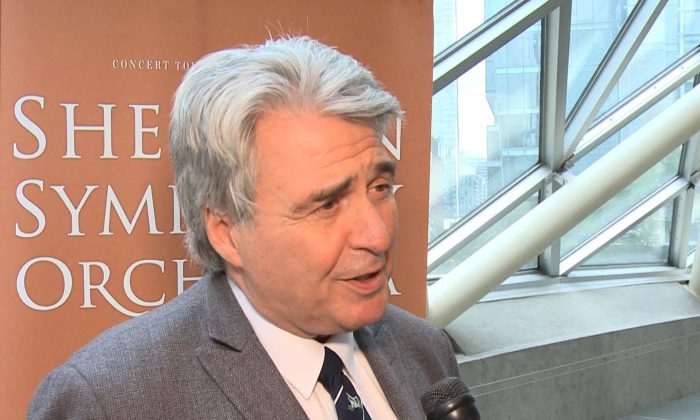 TORONTO—In front of every great symphony orchestra is a great conductor, but few conductors in the world have faced an ensemble like the Shen Yun Symphony Orchestra.

That point stood out for Kerry Stratton, an accomplished conductor known widely in Toronto for his work with the Toronto Concert Orchestra and his two shows on Classical 96.3 fm.

Mr. Stratton has seen the Shen Yun orchestra before, and enjoyed it again on Oct. 3 at Roy Thomson Hall. So did about 2,000 other delighted audience members, who erupted in thunderous applause at the end of the concert, drawing the musicians back for not one but two encores.

Mr. Stratton had a moment to discuss the challenge the conductor, Milen Nachev, faces with the orchestra’s unusual combination of instruments when he interviewed Mr. Nachev on his show recently.

“He is a very fine conductor. I admire him very much,” he said. “He’s got great technique and he really obviously knows this whole show perfectly by now.”

Shen Yun’s orchestra is unique in the world for having Chinese instruments lead the melodies, creating a harmonious sound out of two distinct musical traditions. It includes instruments like the pipa, which is plucked, and the erhu, played with a bow.

“I just wanted to ask him about the challenges and the opportunities,” said Mr. Stratton, referring to this unusual combination.

“The combination is beautiful.”

He said Mr. Nachev faces the challenge of balancing the two types of instruments while avoiding having the Western instruments drown out the Chinese instruments.

“They are very subtle instruments so you cannot overwhelm them. But they’ve solved this balance problem very well. To combine that sound—that very ancient sound with the more modern, let’s say, Western symphony orchestra sound—is a challenge that they’ve met, they’ve met very well. And the colour is unique. You won’t find this colour anywhere else,” he said.

“They are powerful. I liked all the soloists. They have such sustaining power. It was really quite astounding. They can really deliver those arias. And of course it’s new music to me, so it’s great to hear it sung.”

“I liked the violinist, too. She was very, very cool,” he added, referring to Fiona Zheng.

Having seen the orchestra before, and also as a part of Shen Yun Performing Arts where it plays accompaniment to the company’s classical Chinese dancers, Mr. Stratton said it was something new to experience.

He added that those who missed the performance should “come next time.”

“You will have great entertainment, and this is what it is all about. In the end, are we entertained? And the answer is resounding yes.”