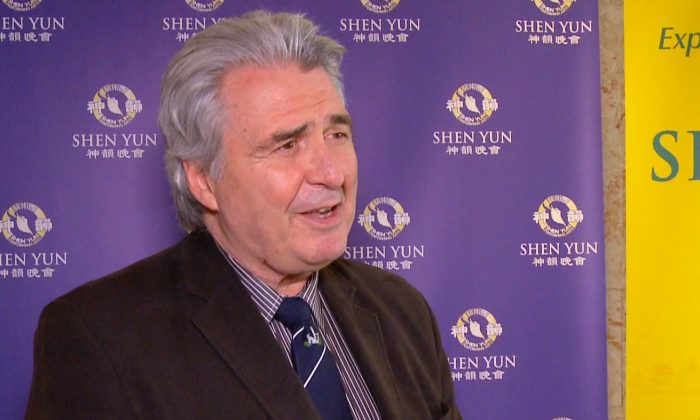 TORONTO—Canadian conductor Kerry Stratton returned to Shen Yun Performing Arts for the fourth time, taking in the performance on Sunday afternoon at the Sony Centre.

This year, he once again praised the Shen Yun orchestra for its fine calibre in presenting music that combines the best of the Eastern and Western instrumental traditions.

Mr. Stratton was impressed by the authenticity of the orchestra.

“Listen to the instruments in the orchestra. The combination of Eastern instruments and Western instruments, and the percussion, and the effects that they’ve used. You don’t hear that anywhere else. Except here, this is the place,” he said.

“This has obviously been wonderfully researched and we’re the beneficiaries.”

Throughout his career, Stratton has conducted many celebrated orchestras internationally, and his performances have been recorded on some of the world’s top labels. At home, Stratton leads the Toronto Concert Orchestra and is also a popular radio host on Classical 96.3 FM.

At Shen Yun, he commended Shen Yun’s conductor, Chia-Chi Lin, who has the challenging tasks of combining the two instrumental traditions of East and West.

“She holds it all together. It’s not an easy task.”

In addition, Lin has the challenge of coordinating the orchestra with the dancers and the animated backdrops, which all interact throughout the performance.

Mr. Stratton was particularly impressed by that feat.

“They know exactly what they’re doing. The playing is very good and the coordination is beautiful. Things can go wrong but they don’t go wrong,” he said.

Mr. Stratton believes this is the result of much rehearsal, focus, and hard work.

“Especially with the animation—the timing is just perfect. There’s three things: the animation, the actual dancer, and the conductor has to bring the orchestra in together.

“It’s fabulous. They really do a great job,” he said.