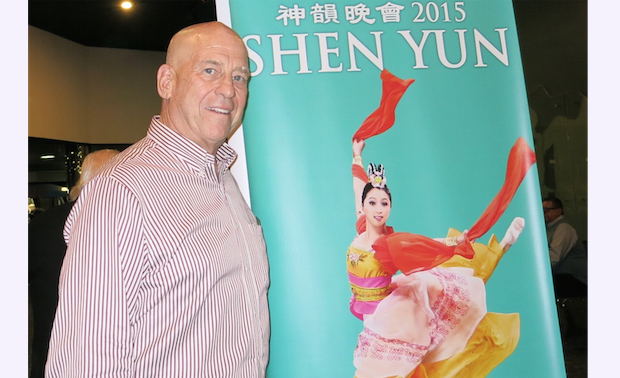 BAKERSFIELD, Calif.—Ben Laverty, president of California Safety Training Corporation, loves different cultures. He studies multiple languages as well as dance styles from various parts of the world, and after watching Shen Yun Performing Arts World Company Feb. 26 at Rabobank Theater, he sees that they are all connected to Chinese dance.

“I see connections with almost every music in almost every other country. It’s the same with the dance. … People seem to have drawn from the Chinese culture and shared that,” he said. “I like to see the similarities.”

“It’s priceless. Touching,” he said. He said it gave him “a spiritual feeling” and that he felt a connection with the performers.

“We’re all [living] in the same world. Frankly, I think we all came from the same God and we worship in different ways, and it’s just touching and connecting to watch this performance,” he said.

Shen Yun is a non-profit, New York-based, classical Chinese dance and music company that seeks to revive the beauty and richness of traditional Chinese culture through performing arts.

A Shen Yun performance includes the world’s foremost classically trained dancers, a one-of-a kind symphony orchestra that seamlessly integrates classical Western and traditional Chinese sounds, and a state-of-the-art, digital backdrop that “infinitely expands the stage,” according to Shen Yun’s website, and “transports audiences to a world where heaven and earth are one.”

“The dancing is wonderful; I can’t believe the flexibility,” Mr. Laverty said.

Mr. Laverty said, “[I liked] every part. The stories, the love, the video integration with the live performers. It’s wonderful. I can’t say more about it—absolutely wonderful.”

Traditional Chinese culture is deeply steeped in spirituality. With Taoism, Confucianism, and Buddhism as its foundation, China’s civilization is replete with myths and legends that convey values such as respect to the heavens, benevolence, divine retribution, courage, and wisdom.

“Very much so,” he said. “I’m very much into meditation and closeness to God, and I see that here. I think it’s wonderful.”

Shen Yun Pieces Are About ‘Discovering the truth’

Also in the audience at Rabobank Theater were David Minier, a judge, and his wife, Rickie.

Judge Minier enjoyed the story-based dances from both ancient and modern-day China.

“It looks like a lot of them have to do with discovering the truth and overcoming evil [to thereby] get a spiritual release,” he said.

One piece Judge Minier noted, in particular, is entitled The Power of Compassion, which depicts the modern-day persecution of the meditation discipline Falun Dafa. In this vignette, a police officer in China stops terrorizing a Chinese man and woman after experiencing their kindness when they help him recover from an injury.

“The thug turned his life around and became a good person, said Judge Minier. “He realized that the good, and the true and beautiful is better than the dark side that he was living in.”

Mr. Minier saw a connection between the spirituality of traditional Chinese culture and his spirituality, and he enjoyed it.

He would like others to see Shen Yun. “I would certainly recommend it,” he said.