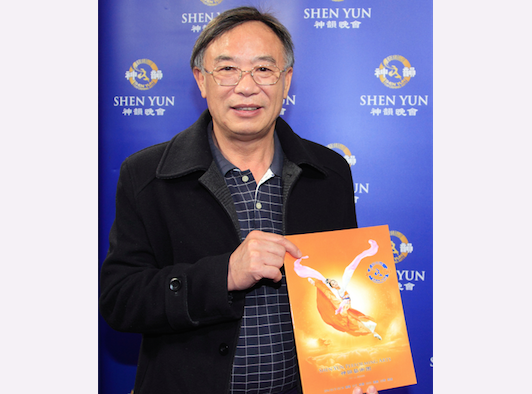 Company President Said Soprano’s Voice Was Beyond the Earthly Realm

TAOYUAN, Taiwan—“Shen Yun is what people really need and what they truly desire,” said Tsai Feng-chun, president of Shayang Ye Industrial Co. Ltd. and a board director for Taiwan Automation Intelligence and Robotics Association, after seeing Shen Yun for the very first time at Taoyuan County Performance Center Performance Hall, on the evening of March 22.

Mr. Tsai was in awe after seeing the orchestra combining Chinese and Western instruments, saying “I was stunned—stunned that in this mundane world there could be a perfect union of the Chinese and Western instruments! It was an enjoyment like no other. And it was only through this combination that such melodies, which sung to both our hearts and our souls, could be played. It was a pioneering achievement. I could only use the word ‘pioneering’ to describe.”

“Never before have I heard music played by the combination of Chinese and Western instruments—how perfect they came together. I believed much effort must be put into it to make everything possible! What’s more, the voice of the soprano was like voice of goddess spoken in our world, bringing unparalleled sensory pleasure to our ears. You felt like you were in another dimension,” Mr. Tsai added.

The “dimension” that President Tsai was referring to is simply an analogy for another realm or a heavenly world. “What you heard was not something you should be able to hear on Earth. These were the sounds from other dimensions, helping you to be immersed in a totally different dimension,” Mr. Tsai explained.

Praising the performers as heavenly maidens who could walk in the clouds and tiptoeing through ocean waves, Mr. Tsai said “The scenery was like a heaven that you could only see in a movie. How their costumes moved with their bodies, and how the skirts swung back and forth, the female performers weren’t walking—they were flying, flying in the clouds.”

Another aspect that had Mr. Tsai in awe was how Shen Yun has brought to life joy when people of ancient times were happily leading a simple life in a beautiful country. “The body movements were astoundingly beautiful and the costumes were exquisite. With both music and body movements, the real harmony based on 5,000 years of [culture] was portrayed in a way that people simply embraced it wholeheartedly,” Mr. Tsai said.

“With a foundation based on 5,000 years of culture, and themes taken from well-known stories in history, Shen Yun has made it easy for anyone to come to the performance and embrace it,” Mr. Tsai said. “And the entire team behind the production was likewise outstanding.”

Mr. Tsai elaborated, “Anyone, even if he only has a limited understanding in either Chinese culture or music, could walk away after seeing the performance, appreciating the essences of the Chinese culture. This is what I believe Shen Yun is capable of.”

Finally, profoundly and emotionally, Mr. Tsai emphatically said “Nowadays, Chinese people are movers and shakers in the world. Bringing on to the stage 5,000 years of culture and stories of the Chinese people, Shen Yun has shown what Chinese people need in the next century. All I can say is, [Shen Yun] is what we truly need and truly want.”