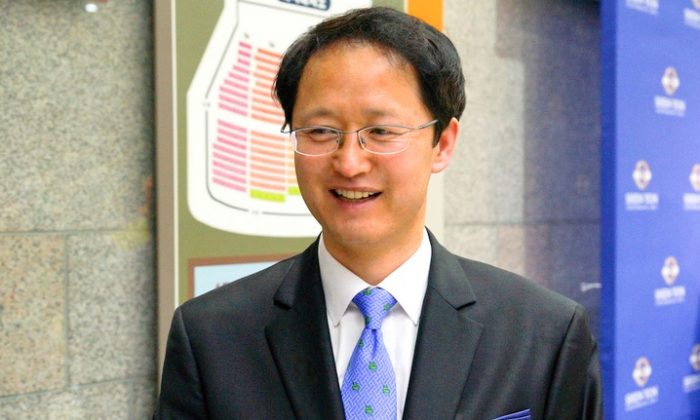 GUNPO, South Korea—”I was very moved by The Power of Compassion in the first half. It brings out the importance of human rights,” said John Hwang, president of Speed Teletex, a company that makes batteries using solar energy.

Shen Yun had its debut in South Korea at Gunpo Culture and Arts Center on April 24, 2015.

Mr. Hwang likes classical music and was once trained as a vocalist. “Music lifts me up in difficult times! Shen Yun’s music and the high-tech background animation are one of a kind and are astonishing.”

The Power of Compassion touched Mr. Hwang’s heart. “Just like the tyranny of the Romans documented in the Bible, communism deprives the people in China of human rights as well. In China, the will of some people represents the laws.”

“Shen Yun shows the current human rights situation in China, and through watching the show, people start thinking about what’s happening in China,” he explained.

“I value leadership as a CEO. Being a leader, one must respect human rights. Things will turn the opposite way when it reaches an extreme. Tyranny in China will end eventually,” he said.

Cheon Gak-Gyu, aka Cheon Ri-Hyang, chairman of Hongik Hyi Etiquette Cultural Center, said with joy after the show on April 25, “Being an Asian, I feel so proud seeing Shen Yun radiate Eastern culture to every part of the world!”

“I see the manifestation of loyalty and filial piety in the stories,” Mr. Cheon said.

Mr. Cheon enjoyed the presentation of traditional values. “China is a historical county with good traditions as well as a variety of ethnicity and customs. They blend together perfectly and develop into the Chinese culture,” he said.

“The program condenses and shows the essence of the three Chinese classic novels: Romance of the Three Kingdoms, Outlaws of the Marsh, Journey to the West. It’s an extraordinary performance,” he said.

Mr. Cheon was impressed with “the way the artists connected the animation on the backdrop to their movements on the stage, it was unthinkable to me. This novelty blows my mind.”

“The backdrops are as grand as they are intricate. So remarkably true to life, they allow you to forget where you are, and journey to another place and time,” says the Shen Yun website.

“This is a performance that covers and condenses Eastern schools of thoughts. It harbors the ideas of loyalty and filial piety and can help people get through tough times,” he said.

Ambassador of Seoul City: ‘So dreamy and mysterious’

Mr. Bak is an ambassador of Seoul City and president of G20 Youth Forum. “This is my first time seeing a performance so dreamy and mysterious. It’s different from all other shows. During the entire show, I was infused with the feeling of well-being,” he said.

“Take The Fable of the Magic Brush for example, the scene of the underwater [Dragon King Palace] in the animated background placed me in a wonderland. I don’t think I can find a better show than this,” he said.

Mr. Bak believed that the positive energy Shen Yun brings to the society will “definitely spread out.”

He said, “Everyone should come to see Shen Yun. It sends out the message of ‘promoting virtue and punishing evil.’ I will start from myself by actively promoting Shen Yun to others.”