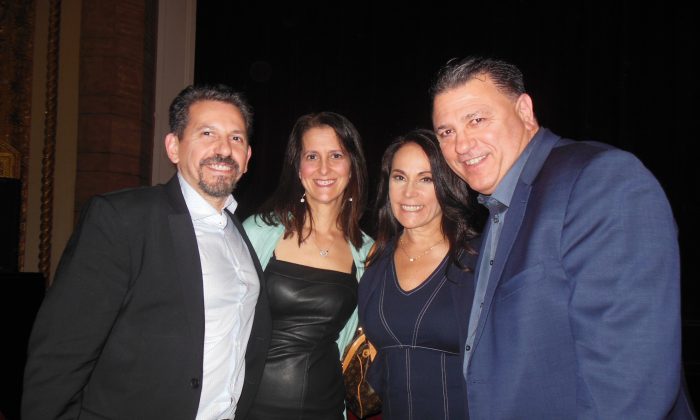 STAMFORD, Conn.—The aesthetics of Shen Yun Performing Arts were what captured the attention of Mark Anthony and his wife when they experienced the traditional dance and music performance. From the colors to the pure hearts of the dancers, Anthony said Shen Yun’s essence of beauty came from many levels.

“I think the essence the beauty comes [through] in every piece,” said Anthony. “The beauty has multiple levels—there are the levels of movement and grace, there are the energy and the flow of the costumes, there’s the joy in the interaction of the dancers working both individually as well as synchronized as one, and all of that together makes it blends so beautifully.”

The president of the company Training for Success saw Shen Yun at The Palace Theatre with his wife Tracey Visceglia and friends on March 30. The New York-based company is in the midst of its 2019 tour where six equal-sized groups are traveling the world, performing in sold-out shows in renown theaters.

The company’s name “Shen Yun” means the beauty of divine being dancing. Its mission is to bring China’s 5,000 years of semi-divine culture and values and back to the modern world through performing arts.

Like Anthony, his wife Visceglia, a teacher, was also struck by the performers’ beauty, but added that it went beyond the aesthetics.

“You look at it and admire the beauty. It’s similar to what my friends and my husband said, the beauty of the story, the beauty of the spirit of the story, and then there’s part of your brain admires that, [which] affects you emotionally also,” she said. “When I’m watching a performance like this, I also get beyond my brain. You have an emotional, energetic, and spiritual experience. It’s a very meaningful, exciting experience.”

The couple shared how the performance portrayed pieces that are inspiring to the audience.

“Dance is a way where you can be inspired. It’s a way of expression of both your goals, your feelings and your experience, all wrapped up into one. That creates a level of emotion, which can be interpreted so differently by so many different people,” Visceglia said.

Anthony said he found the story-based dance “Goodness in the Face of Evil” particularly touching. The piece tells of a young girl who tries to share her faith in Falun Dafa with her mother but was persecuted for doing that by the Chinese communist regime.

“As far as touching the heart, seeing the woman who was pursuing her dreams or goals, and then had the obstacles of persecution, government, stopping her, and then her faith, her belief setting her free and giving her the ability to move beyond that pain, and being joyous once again, was quite moving as well as beautiful,” he said. “That particular piece definitely was extremely inspiring.”

Falun Gong, or Falun Dafa, teaches the principles of “Truthfulness, Compassion, and Tolerance,” where adherents seek to orient themselves toward self-betterment, taking responsibility, and putting others first.

Shen Yun depicts several pieces about the persecution, which portray themes like spiritual devotion, the benevolence of gods, good and evil retribution, and the search for the meaning of life, according to the company’s website. These values are foundational to traditional Chinese culture and are not political in nature. Instead, they inspire audience members and encourage them to reflect on the modern world.

The couple’s friends, Edward and Gina Torres, were also captivated by the storytelling and the performers’ artistry.

His wife Gina, a senior vice president at a bank, was impressed by the performers’ athleticism.

“I enjoyed it tremendously as well for the same reasons, also the athleticism. The way in which they can move their bodies and jump, and very beautiful! … Just beautiful movement. And I like the arms, where the arms and the costumes helped them. Flow, the long sleeves, when they pull it back like that,” she said. “It’s beautiful!”