Company President and Daughter Watch Shen Yun, Make Plans for Next Year Too 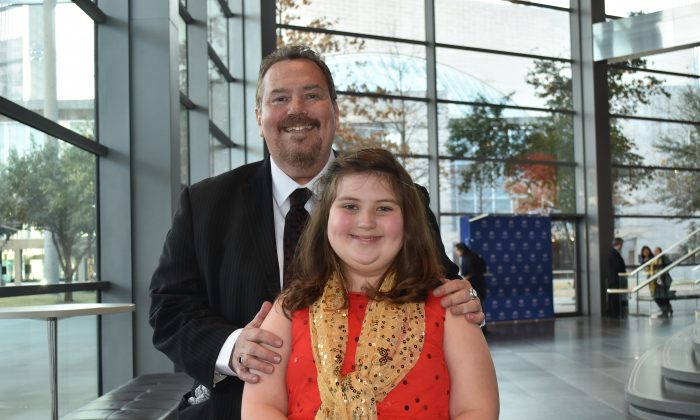 DALLAS—Young Bella Penny had a wonderful seat from which to watch Shen Yun Performing Arts, the one next to her father.

“I loved it,” said her father. “There are no words that can describe the show. People really have to see this show. It’s just amazing. And there are so many unexpected things in there.”

“For one, the transition going from the screen into the dancers back and forth just really flowed tremendously well and was just beautiful, and also just some of the different ethnic type dances that they did for different areas of China were really very amazing, so it was beautiful. It really was,” he said.

“We loved the two solo singers, they were amazing,” said Mr. Penny. “It’s just incredible, and we see a lot of dance stuff in everything and there’s nothing can compare.”

Then, as an afterthought he added, “Well, except Bella’s dance. Hers is always better than anybody’s.”

Bella giggled and then Mr. Penny laughed good-naturedly too.

Shen Yun was started in 2006 when a group of Chinese artists came together to revive the traditional Chinese culture, passed on through China’s dynasties for 5,000 years.

In 1949, that changed when communists seized power in China. Immediately, they began destroying the traditional culture and those who upheld it, and installing a communist culture instead.

Today in China, spirituality is state controlled, with members of the communist party often taking leadership roles within religions. Those who do not comply with politicians controlling their faith can face torture and even death. Tibetans, Uighurs, many Christians, and a huge population of Falun Dafa practitioners are persecuted by the Chinese Communist Party, and vilified by the CCP online and throughout communist media in China.

Shen Yun does not shy away from the reality of China, and openly present several mini-dramas that help people world wide understand what is happening in today and what will become history, alongside the stories from other times.

Mr. Penny reflected on these pieces.

“Yeah, you really see how the people in China are really chastised and tormented and tortured from what I can see, for just trying to follow their beliefs,” he said, adding that freedom of belief is not something that people in the United States have to worry about.

“We can worship any way we want to,” he said. “[We] can stand out in the corner and worship, and pray, and ask God for help with anything, and there’s no fear, there’s no worry.”

Mr. Penny said he felt emotional while watching a Shen Yun Performing Arts piece that depicted not having those freedoms.

“It’s just sad to see people can’t worship in a way that they want to do,” he said.

Each year Shen Yun Performing Arts tours with a new production, with new mini-dramas and songs that draw on the spirit of the ancient culture, and tell the story of China throughout its history.

Bella Penny said that they will come back next year.

“We’ll definitely be coming back next year,” agreed Mr. Penny, adding that they looked forward to getting their tickets early.