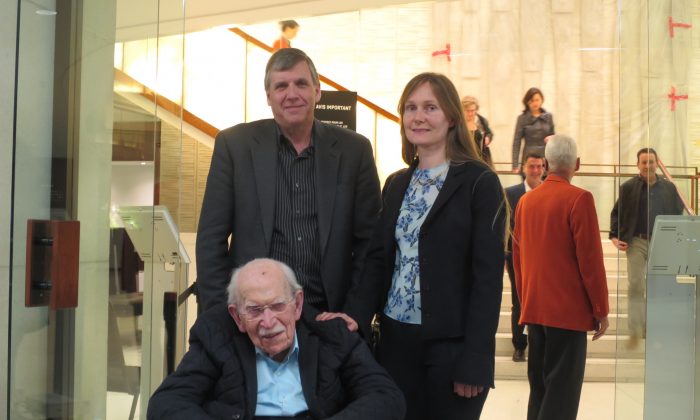 MONTREAL, Canada—Company director Jon Druhan and his sister, Maggie Kaussen, wanted to bring their father to an event for his 97th birthday, and their choice of attending Shen Yun Performing Arts was more than well received by their dad.

New York-based Shen Yun was established in 2006 with the mission of reviving the traditional culture of China. The company tours the globe every year with an all-new program showcasing the dance and music of the 5,000-year-old ancient civilization, which has as its essence a deep belief in virtue and a profound respect for the divine.

It was an impressive presentation of an age-old culture that resonated with Mr. Druhan, who joked that he “can’t kick around anymore” but said he enjoyed the show very much and, “yes, we will come back again.”

His son, Jon, is the director of medical affairs publications at biopharmaceutical company AstraZeneca. He lives in Philadelphia for his work but came home to Montreal to help his father celebrate his birthday.

He echoed his dad’s praise of the show.

“Visually stunning,” he said, referring to the vivid colours of the sets and costumes and particularly the animated digital backdrop accompanying each performance.

“I thought it was very beautiful. I really enjoyed the colours, the interaction with the dancers and the screen behind. It was very well done, just a very good show.”

The backdrops, a hallmark of Shen Yun, are designed to complement and synchronize with all aspects of the performance, from the characters, storyline, and colours of the costumes, to specific dance movements, the props, the lighting, and even the various special audio effects and particular notes played by the orchestra.

The younger Mr. Druhan also enjoyed the Shen Yun orchestra, unique in that it combines a Western symphony orchestra with traditional Chinese instruments that lead the melodies.

“The music was beautiful,” he said. “The Chinese instruments combined with the orchestra were very nice, good to hear.”

Ms. Kaussen had similar compliments for the performance.

“I thought it was magnificent,” she said.

She said that what stood out the most for her was the flow of the dance movements. “The movements were very, very in sync and they just flowed like a river,” she said.

And as for her dad, he said he would certainly recommend Shen Yun to his friends. He would tell his friends that “they should attend,” he said.