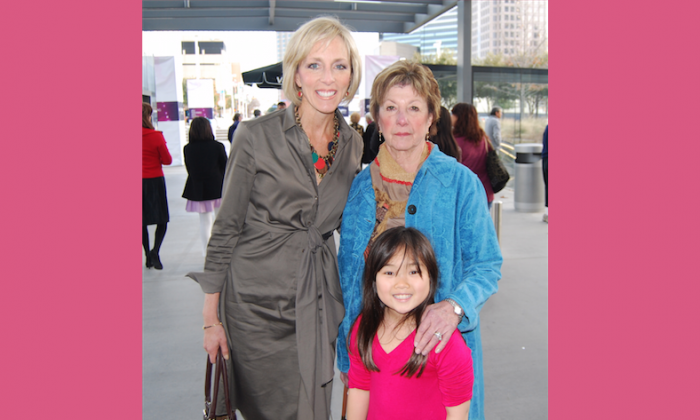 Patty Sullivan with her daughter and her mother enjoy an afternoon at Shen Yun Performing Arts at the Winspear Opera House in Dallas, Jan. 4. (Catherine Yang/Epoch Times)

DALLAS—Shen Yun Performing Arts proved beautiful and touching for Ms. Patty Sullivan, director of communications at Children’s Medical Center, as she attended the performance for a second year with her mother and adopted daughter from China.

“We love to explore and experience the Chinese culture, and this experience was just stunning,” Ms. Sullivan said at the Winspear Opera House in Dallas, Jan. 4.

For eight years, Shen Yun has toured the globe to revive 5,000 years of Chinese civilization through the performing arts.

After opening her own public relations firm, Ms. Sullivan went on to hold several senior vice president positions for companies including Texas Capital Bank and MoneyGram.

Since seeing the New York-based Shen Yun for the first time last year, Ms. Sullivan and her daughter loved it so much they had to come back.

The performers refreshed Ms. Sullivan, inspiring her physically, and the content really touched her heart, she said.

Shen Yun’s dancers are trained in classical Chinese dance, which has been passed down through thousands of years, soaking up profound wisdom from each era and dynasty. It is a complete and independent system of dance with unique movements, rhythms, and inner meaning.

Classical Chinese dance also includes highly difficult tumbling, flipping, and jumping techniques, which—little known to some in the audience—are where sports like gymnastics and acrobatics originated.

Ms. Sullivan paid special notice to the unique, gentle hand movements used by the dancers, and she felt especially relaxed throughout the entire performance.

“This was engaging and mesmerizing,” Ms. Sullivan said.

The performance also touched for her on a personal level. The lotus flowers depicted in many of the dances, symbolizing purity, reminded Ms. Sullivan of her own daughter.

“It reminded me of the flower I brought home from China when I brought her home,” she said.

Ms. Sullivan said she recalled some of the lyrics, whose translations were projected onto the digital backdrop. The lyrics spoke of walking through life, suffering, or feeling confused.

“That hit home,” Ms. Sullivan said, because the songs revealed the great understanding that “afterwards, this is not the end.”

Ms. Sullivan’s daughter and mother enjoyed the performance as well.

“Wonderful,” Mrs. Sullivan said. “Just the colors, the quality of the dance, the soft landings. It just amazed me.”