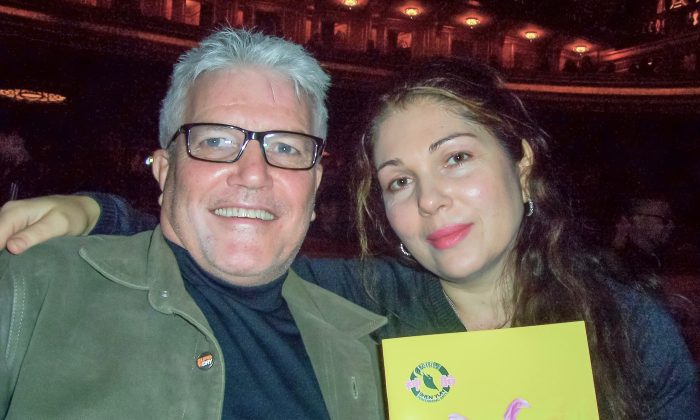 Based in New York, Shen Yun has the mission of reviving 5,000 years of Chinese culture and history through classical Chinese dance and music. Many of the dance pieces tell stories and legends from ancient China.

The show speaks to the soul, not the mind.
— John Hone

“The stories are universal; they speak to the human spirit and emotion … something that’s deep inside all of us that is sometimes indescribable through words,” said Mr. Hone. “The dance and the choreography brings it out without words. It’s so beautiful. The show speaks to the soul, not the mind. You feel the show rather than intellectualize it.”

Shen Yun’s website explains that classical Chinese dance is richly expressive. Passed down through the dynasties for thousands of years, it is able to convey emotions and inner meaning through beautiful movements.

“It’s playing with those emotions we all have: the sadness, the joy, love, cruelty … it’s playing on all of those pieces of life, the things that we all deal with,” Mr. Hone said.

He said he was fascinated with what he learned about traditional Chinese spirituality, as he hadn’t thought of China as having any spiritual beliefs.

According to Shen Yun’s website, traditional Chinese culture is built upon universal values such as benevolence, justice, faith, and respect for the divine.

“There’s a Creator that made all this, and He’s still there,” Mr. Hone said. “It’s pure. … There’s a truthfulness to it.”

His wife, originally from Uzbekistan, saw in Shen Yun “the art of people’s souls.”

She was delighted by the dance piece “The Lady of the Moon,” a classic legend of the moon goddess Chang’E.

When Mrs. Hone saw the goddess’s flight to the moon depicted in Shen Yun, she thought, “Wow! You know, I could do that!”

“You’re in their story. You’re not here, you’re not sitting here, you’re there,” she said. “You feel the spirit is just there. You just dance with them. You see the colors and rainbows changing you.”

Each Shen Yun performance is indeed a rainbow of color. The dancers wear brilliant handmade costumes and use colorful props such as fans and handkerchiefs to create beautiful images, according to Shen Yun’s website.

Mrs. Hone was amazed by the costumes’ beauty and detail.

She said Shen Yun is “always clean, and it’s close to God. It’s changing your vision, the way you think and live. … You take these pieces to go home, and it’s with you. It’s really good. It touches your heart.”

She was enamored with the music of Shen Yun’s live orchestra, which combines Eastern and Western musical traditions for a unique and harmonious sound. She admired the classic instruments such as the erhu, or Chinese violin.

“It’s healing,” she said. “It’s really good for kids to watch, and for any age.”

Her husband called Shen Yun “an incredible extravaganza of color and movement.”

“It talks to the human spirit,” he said. “We overcome adversity and endure.”