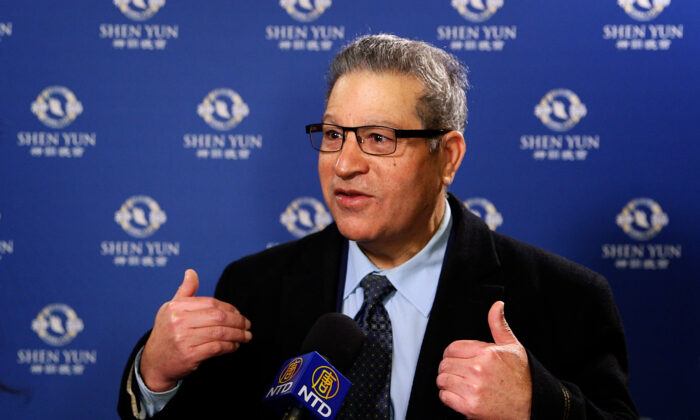 WINNIPEG, Manitoba—Tilak Dewan, founder of PACE Canada College, was not surprised to learn that all the artists of Shen Yun Performing Arts practice meditation. After all, they exuded such soul and humanity that it seemed a given in their case.

New York-based Shen Yun is playing two performances at Centennial Concert Hall, and Dewan caught the first performance on March 3, 2020, and said it was only a pity Shen Yun could not perform more shows, more often.

Shen Yun is the world’s premier classical Chinese dance company and takes as its mission to revive the traditional Chinese culture.

“Oh it is beautiful, it should happen more often,” Dewan said. “Because the mediation, the spiritual values, that is what makes our humanity. There should be freedom of thought, freedom of expression … It takes you back for 5,000 years through Chinese culture.”

The culture of ancient China was indeed believed to be divinely inspired, and ways of faith like Buddhism, Taoism, and Confucianism were cornerstones of society.

These themes came full circle for Dewan throughout the performance.

Dewan said things like spirituality, meditation, and looking inward were things he was familiar with as he practiced meditation himself, and they were on display by the Shen Yun artists who practice the meditation Falun Dafa, as well as in the performance itself.

“It’s a refinement of your own thinking process,” he said. “You’re able to connect with the cosmic world. That comes out very clearly.”

In fact, the stories in Shen Yun helped audiences connect with their inner selves as well.

In Shen Yun, through the ancient legends told through dance, such as that of the Creator descending to earth, Dewan saw a “journey from the heavenly to the mother earth.”

“It takes you back to the past,” Dewan said. “You get connected to your own self, actually.”

With the stress and the incessant busyness of technology in the modern-day, Dewan felt this all the more necessary.

“There will be free flow of thought—so these shows are very good actually,” Dewan said.

He was happy to hear that in Shen Yun’s 13 years touring the world the company has grown from one to seven equal-sized contingents and said without a doubt Shen Yun would have a positive impact on mankind.