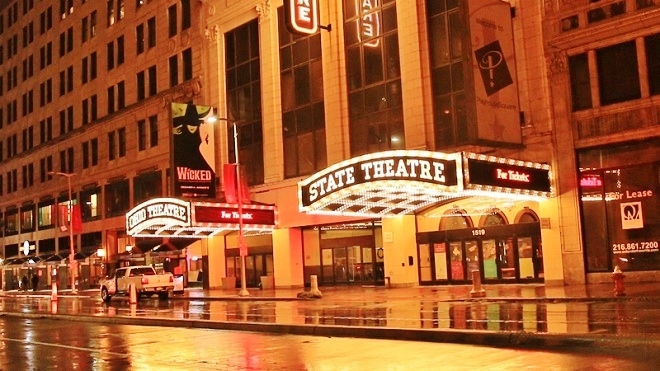 CLEVELAND—There were many emotions that attorney Gina Beredo experienced while watching Shen Yun with her 10-year old daughter Ava.

“It brings me to tears actually, it’s so moving and beautiful, and graceful; very lovely. The story lines are amazing,” said Ms. Beredo about Shen Yun at the matinee performance on Jan. 31, 2016.

Ava concurred with her mother by saying that the show is “really pretty” and “they do all sorts of cool things.”

Among the “cool things” that audience members have mentioned is how Shen Yun performances feature animated backdrops with which the dancers interact to enrich narratives such as the story called “Monkey King and Dragon Palace” inspired by the classic novel “Journey to the West.” The story appealed particularly to Ms. Beredo who said that she “really enjoyed it”.

On a different note Ms. Beredo was also considering the other narratives depicted in the show and her daughter’s understanding of the issues which she thought were an important learning experience.

“[Ava] had read the story of “The Steadfast Heart” so she knows it better than me. And then the last story, of course, about the gentleman who was being persecuted for meditation, and understanding that that still occurs today is very upsetting,” said Ms. Beredo.

Both stories depict the bravery and compassion that Chinese people who practice the spiritual system called Falun Gong are able to show even while the communist regime continues to suppress spiritual belief and freedom of expression.

“[I feel] extremely sad, it also makes me wonder what I can do to help, and I’m so glad that they are telling that story not only to me, but to my daughter so that she understands that this still happens in the world,” said Ms. Beredo.

Ms. Beredo was anticipating many questions on the subject from her daughter, on the way back home.

“I think it is very important that the younger generation knows that the world is not perfect, and its upon all of us to make sure that we can try to change things, and that means both of us too,” said Ms. Beredo.

She saw this as an opportunity for her daughter to learn about Chinese culture, and “understand how it is to live in another piece of the world other than the United States, and what we can do to make it better for them”.

The experience gave Ms. Beredo food for thought about the world, China, and its current regime, and her own role as a global citizen.

“I’m going to pay attention more to what happens in China and the human rights activity that is going on there—who’s helping and what our government is doing to help the Chinese people, and the human rights campaign,” said Ms. Beredo adding: “It made me feel very sad for the Chinese people, that that occurs and makes me angry that the government does that.”

Ms. Beredo’s answer: “I guess there is a lot—from little to big—obviously pay attention to our government, support shows like this, buy books, and make sure the story continues to be told.”

Amy Jenyk, took the opportunity to unwind from her busy schedule as CEO and president at Omni Media Cleveland by attending the Shen Yun matinee performance at the State Theatre with her two young boys aged 9 and 10, on Jan. 31.

“It gives you a sense of, I don’t know, I can’t stop smiling, watching the whole thing. I find it very wonderful,” said Ms. Jenyk about the performance, noting also the beauty and color of the costumes, as well as the way in which the dancers integrate with the digital backdrops.

Ms. Jenyk’s older son is just starting to play an instrument and they talked about how interesting it would be for him to play the style of music that they witnessed the Shen Yun Orchestra perform.

The orchestra captures the essence of the East and West with a unique approach. Ancient Chinese used instruments to relate their inner feelings and states of mind, according to the company’s website. Meanwhile, Western music focuses on the overall effect of the musical ensemble—and to achieve that, arrangement and harmony are of utmost importance. Shen Yun’s music combines these approaches and for that reason continues to captivate audiences worldwide.

Overall, Ms. Jenyk said that the experience of attending Shen Yun for her was “mystical, like a very mystical place to watch and see,” adding, “it kind of overwhelmed me, in a good way.”

Ms. Jenyk was already looking forward to seeing Shen Yun again if the company was going to hold shows in Cleveland, and was also planning to encourage her friends to see Shen Yun because “it’s breathtaking.”